South Park from NetEnt: Slot Review - head on down to South Park for some laughs, bonus features and great graphics

GamingRevolution tested one of the most talked about online slot games on the market. NetEnt's online slot South Park is packed with bonus features and fun graphics, which are just as great as the TV-Show's.
casino game review netent slot machine slots south park

NetEnt's South Park is one of the software provider's big productions, which was announced pompously at ICE Totally Gaming a few years back. This branded slot greets players with the iconic South Park theme tune, a short and expertly produced video, which shows Kenny getting killed by a slot machine falling on his head, and then redirects to the 5-reel and 3-row game screen. 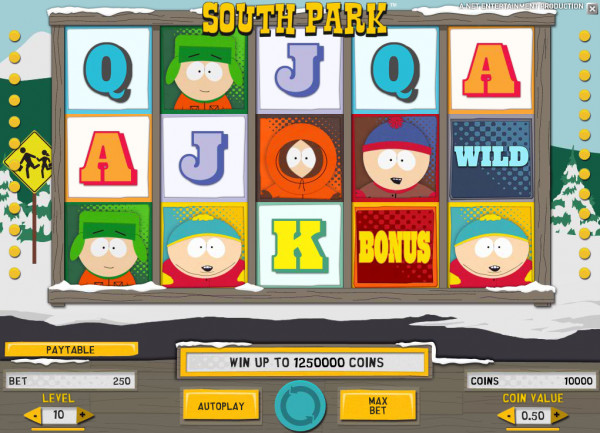 The so-called Cartman feature amplifies the thriftiness of this character. In this bonus feature, players can win 5000X their stake, which is rather gigantic and for that reason is among one of the most loved features in this game. This bonus game entails grabbing a fire extinguisher and aiming it at hippies, which are hiding behind the bushes. If that doesn't sound typically Eric enough, you can sure win some prizes if you aim right without getting busted by South Park's local policeman, Officer Barbrady. A total of 1,250,000 coins is up for grabs during this bonus feature.

Further little bonus games, that are just as profitable, are available for the other main characters, from Stan to Kenny. These aside, this Net Entertainment slot game also features wild and free spins combos on the reel. For example, Mr Hankey may appear at random on the reels and transform the symbols into wilds.

The slot game's mobile version, which was introduced some months later, is equally impressive in terms of graphics. Of course, the online game features the characters from the famous South Park gang, and, as you will see below, features some great games, which allow players to get into character. What would Eric Cartman do?

Bet level and coin value can be adjusted. Due to the fairly good edge on the player side, a relatively low stake can get players good payouts. Given the excitement the different bonus features (eight in total) offer, I tend not to put the game on Autospin. It's an exciting enough slot game to not just watch but to actively control. The sound effects are great and rarely need adjustment. This, however, is subject to opinion. Some may find them as annoying as others find Eric Cartman annoying.

Our Verdict on South Park

I love this South Park slot game, produced by NetEnt. Part of this is due to a love for the TV-Show and bonus features. This game will be a delight to many but could be less attractive to those who feel that 'too many cooks spoil the broth' or who dislike the somewhat vulgar, yet funny, TV-Show.