Sinbad from QuickSpin: Slot Review - join Sinbad for his voyage on the high seas

You have guessed right, Sinbad in this slot machine, developed by the Swedish software developer QuickSpin, refers to the fictional sailor Sinbad, who undertook adventurous voyages beneath the Arabian skies. 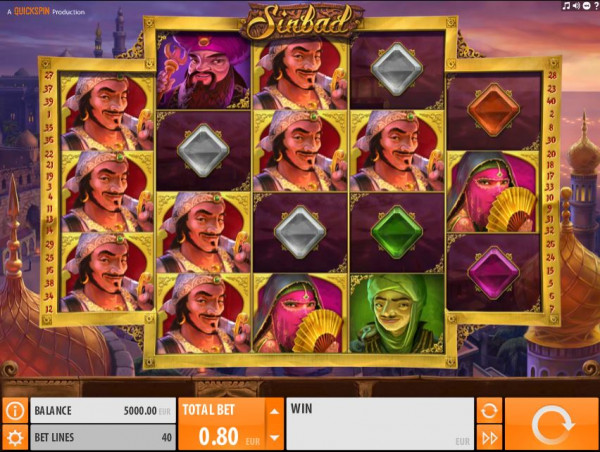 Sinbad is all about Arabian heroism and myth. For that reason, it is quite fitting that the slot machine provides players with some super special bonus features. Sinbad by QuickSpin comes with a free spins feature, which can be activated upon a player receiving the ship symbol. It is, however, not as bog-standard as this. Once a player is granted free spins, he can pick from a selection of free spin types. The so-called 'roc free spins' mode gives a player ten free spins, and if he lands a diamond, that diamond is added to a scale, which once it is piled with seven diamond, gets a player some extra spins. The 'ape free spins' get players seven free spins and if the ape appears on a players’ reel, adds at least one wild symbol, but most likely more, to the reel. Even better, that wild symbol will be locked so long the player finds himself in free spins mode. Lastly, there are the 'snake free spins'. This choice gives a player 12 free spins and the snake wild could potentially trigger a snake sliding across the reel, dropping wilds all over the reel.

What I like about this feature in Sinbad is that it is interactive. QuickSpin took a relatively basic feature, available in many videos, 3-D and another slot machine, and has turned it into a much more complex and fun feature. Top marks! My least favourite feature is that I have to pick, but I guess that’s just life.

The design of this slot machines leaves no doubt. The background depicts a Middle Eastern city, its minarets glimmering in the pinkish night. The reels, organised in a cross shape, are outlined by thick gold and the symbols show Arabic symbols, veiled women, Sinbad himself and diamond shapes in bright colours.

So far, QuickSpin did a good job at setting the atmosphere, and providing players with a slot game that is far from common in terms of its theme. As we have come to expect from the innovative software provider, several features to make gameplay easier for players are available in the slot machine. The player can click on fast play to activate quicker successions of spins, which is a great asset or can view detailed information regarding paylines, winning combinations and the worth of symbols by clicking on the paytable. In light of a staggering 40 paylines, checking out the rules is advisable when it comes to QuickSpin’s Sinbad.

As noted, the quick spin is quite the asset. Other features, such as the bet adjuster, are of course helpful to optimise game play. The game is available from a mere 0.40 per spin – and that amount can be at times enough to get you some pretty good wins. The wins may not be as gigantic as in other slot machines, in particular, jackpot slots, but with a very good free spins feature, they certainly are frequent. As with any game of chance, though, players could enter an unlucky or a lucky streak. Therefore, it is good to set some winnings aside and adjust the bet based on the previous few rounds.

Our Verdict on Sinbad

Sinbad by QuickSpin is a great slot machine. It is always a joy to play a QuickSpin slot game, as they produce less, but therefore much different slot games. This is best represented by the free spins feature, which is a core feature in slot games by the big providers but takes on an entirely different meaning in Sinbad. Having a pick of your favourite free spins feature is another gamble, but adds to the interactive value of the slot machine - after all, Sinbad was adventurous!