Sharknado from PariPlay: Slot Review - plenty of bite in this game!

If you love B-movies and cult classics then you have surely heard of the infamous Sharknado movie. Once in a while, a movie comes along that is so bad that it is actually really good to watch and this is that kind of movie! The film contains a crazy plot where a freak cyclone hits LA, causing man-eating sharks to pop up all over the place. Madness and hilarity ensue as a group of people try to run from tornadoes swirling with sharks!

It is definitely the kind of movie where you leave your brain at the door before watching it! This movie became so popular that it has already spawned a few sequels and nowadays you can buy all kinds of merchandise based on the unlikely pairing of sharks and tornadoes.

The game has 5 reels, 25 paylines, and features random wilds, free spins, and a sharknado mode. 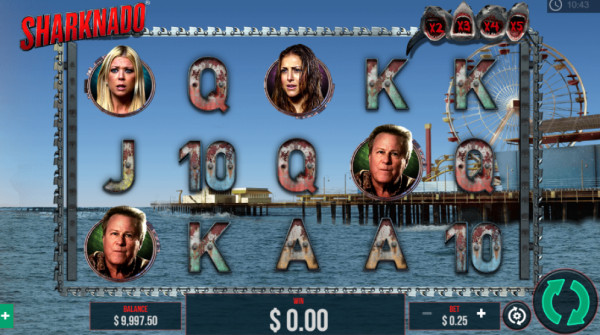 The first feature I noticed when playing the game is the Wild symbol and it is depicted by the word “WILD” with a diamond-shaped red background. This symbol substitutes for all other symbols except the Free Spins symbol. It is the highest paying symbol in the game and if you are lucky enough to land 5 of these symbols then you will be rewarded with a nice haul of 2,000 coins. Another neat feature of this symbol is that when it appears on the reels, a chopper will fly by and attempt to hit it with a nuclear bomb. If the bomb lands on the Wild symbol then you will be rewarded with a random number of wilds. These Wilds will remain for the duration of the spin.

The final feature to discuss is the Sharknado mode. This is a random feature and can come into play at any time. You know exactly when you have triggered this feature when a tornado starts to shake the screen! It awards players multipliers ranging from 2X to 5X and the rounds for this cool mini-game can last between 5 to 12 rounds.

The game faithfully reproduces the zany action of the movie with some excellent graphics and effects. The backdrop of the game is a seaside pier with a Ferris wheel in the distance and sharks swimming ominously close towards it. The symbols consist of the various characters from the movie as well as the infamous chainsaw. They pop nicely and you get some cool snippets of the movie when you land a win along the reels.

The music is quite atmospheric and it is full of tension with soft piano beats and low techno sounds. It suits the game really well as you spin the reels and try to avoid the sharks at all costs.


Our Verdict on Sharknado

Sharknado is made by PariPlay and it's a faithful representation of a zany and extremely silly movie. If you enjoyed the film then you are going to love playing this game and the Sharknado mode is a great feature to play when it randomly triggers. One downside of this slot is that it is not possible to retrigger Free Spins. The game is a budget-friendly title with a nice range of betting options. It is of Medium variance so if you are a high-roller then don’t get expect to be awarded humongous payouts here.

Whip up a storm in Sharknado!