Join RoboCop a cyborg cop who hunts down the bad guys on the streets of Detroit.
casino game review playtech robocop slots

This game is based on the classic 80s sci-fi movie RoboCop. In the movie set in Detroit, a brave police officer called Alex Murphy is gunned down while in the line of duty but brought back to life as a cyborg who becomes the ultimate crime-fighting machine. The movie follows Murphy as he hunts down those responsible for fatally shooting him alongside his streetwise partner Office Lewis. I remember this movie quite fondly and it makes me feel really old when you think a reboot of this cult classic was released in 2014! Accomplished actor Joel Kinnaman took over the title role that was made famous by Peter Weller in 1987 but the 80s version is still my favourite. Let’s head to Detroit and accompany RoboCop as he deals out justice in a not so robotic way to all the bad guys out there!

RoboCop is 5 reel slot game with 25 paylines and it includes Free Games, Huge Wilds, and a Pick Me Bonus Game. 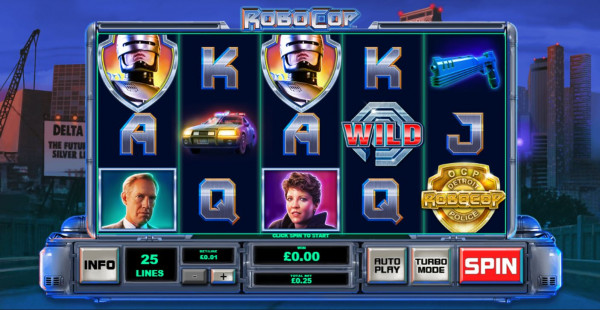 The first feature to highlight is the Wild symbol, it is represented by an image of OmniCorp. Like most Wild symbols, It substitutes for all other symbols except the Scatter symbol to help form winning combos and it is the highest paying symbol in the game. If you manage to land 5 of these symbols across the reels then you will be awarded an impressive 100X your total bet!

In the main game, there are 4 bonus features that can randomly trigger on any spin. They are as follows:

The Scatter symbol is illustrated by a golden OCP police badge and if you land 3 of these symbols simultaneously on reels 1, 3, and 5 then you will be taken to the Features Menu screen where you get to pick one of 4 features to play as your bonus. The Bonuses are enhanced versions of the randomly triggered bonus games and they are as follows:

The game is full of slick graphics and bright neon colours as it is set in a crime-riddled Detroit somewhere in the near future. The backdrop of the slot is the OCP building with a busy highway road right below it. The symbols are wonderfully detailed and consist of the eponymous RoboCop, Officer Lewis, Dick Jones, a Gun, a Car, a Badge, and the standard A – J icons. The animations are a real visual treat as symbols enlarge and become enveloped in a bright neon glow and when you get a big win, a police car will pop up with sirens wailing all over the place to celebrate with you. It is a really nice touch.

The music is 1980s light techno and features excerpts from the RoboCop movie soundtrack. It ties everything together nicely.


Our Verdict on RoboCop

RoboCop is made by Playtech and I am happy to report that it is a fitting tribute to a classic sci-fi movie. As a fan of the movie I was skeptical about playing this game as not many movie titles translate well into good online slots but this game is definitely an exception to the rule. Players are going to love the number of bonus features on offer and it is great that some of them are randomly triggered in the main game as this breaks things up nicely as you spin the reels. The most profitable feature I found while playing is the Robot Attack Free Games as not only do you get 5 Free Spins but a huge Wild symbol that is 3x3 in size appears on each Free Spin! I found this game to be of Medium variance so it won’t take you too long until you bag yourself a tidy payout.

Stop crime in Detroit and earn yourself a fortune when you play RoboCop!