Explore the ocean floor all the while avoiding a bunch of hungry sharks in this superb slot from Push Gaming!
casino game review push gaming razor shark slots

Grab some swimming gear to go deep-sea diving for lost treasure in this new title from leading software studio Push Gaming. Sounds exciting right? Except there is more than a hint of danger here as a bunch of sharks are circling the depths below just waiting on their next meal! The name of the game is a fun take on the expression “razor-sharp” which is quite apt when you consider how sharp a shark’s tooth can be, especially a Great White! Let’s find out if deep-sea diving with these sharks will lead to lots of cash prizes on the reels as well as us emerging in one piece? 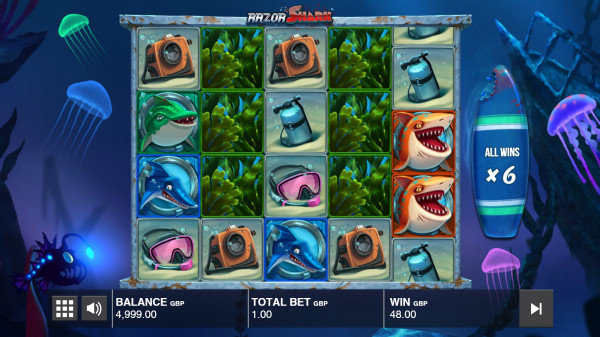 Razor Shark features a range of deep-sea diving related symbols including Goggles, Flippers, Oxygen Tanks, Underwater Cameras, as well as 5 different Sharks including Hammerheads and Tiger Sharks. The most valuable symbol in the game is the Great White Shark as it pays out a fine 50X your wager for landing 5 on a payline. The Great White Shark is also the Wild symbol in the game and substitutes for all other symbols apart from the Scatter to help form winning combinations on the reels.

In the Razor Reveal feature, each symbol of the Mystery Stack will spin to reveal coins that have a multiplier value between 1X and 2,500X or Scatter symbols. When all the symbols of the Mystery Stack have landed a reward, then all of the coins will be totalled and a cash prize is paid out.

The Scatter symbol in the game is illustrated by a Sea Mine and if you land 3 or more of these symbols anywhere on the reels then you will trigger the Free Games feature. In this highly lucrative feature, both reels 2 and 4 are filled with Mystery Stacks along with a multiplier value that applies to all Free Game wins. The multiplier starts at 1X and increases every time the Nudge and Reveal feature is activated. The Razor Reveal feature is also active during the Free Games, but will only reveal Coin Multipliers and Scatters that make the Mystery Stacks nudge by 1 position. For every additional Scatter you land in this feature then you will be awarded an Extra Free Game. Free Games continue until there are no more Mystery Stacks on the reels.

This game features stylish cartoon-like graphics as the action takes place in front of a swaying coral reef on the ocean floor along with lots of fish swimming by. Symbols in the game are extremely polished and well designed and consist of Swimming Masks, Underwater Cameras, Flippers, Oxygen Tanks, along with 5 different Sharks. The Great White Shark is my favourite as it has glowing red eyes to make it look even more villainous! The animations deserve special praise as symbols fly down the reels rapidly and burst into life spectacularly when part of a winning combination. For example, the screen will flash and glow when you have 2 Scatter symbols to increase the tension and excitement as you wait to see if a 3rd Scatter symbol will appear in order to trigger the Free Games feature.

The music features an upbeat techno-style soundtrack that’s quite catchy, to be honest. It fits in really well with the Underwater theme of the game.


Our Verdict on Razor Shark

Popular software provider Push Gaming produced this extremely entertaining online slot. Featuring lush graphics, an exciting array of bonus features, as well as action-packed gameplay, it’s one of the best Shark themed slots we’ve ever played. The Mystery Stacks ensures the excitement levels never drop, with the Razor Reveal feature being quite lucrative as you can win cash prizes worth up to 2,500X your bet. Having said that though, this game is all about the Free Games feature as not only can you benefit from 2 reels filled with Mystery Stacks but also benefit greatly from increasing multipliers. It is also in this feature where you can win the top prize which is an extraordinary 50,000X your bet! In terms of variance, it is High so you better pack lots of bankroll before deep-sea diving and have plenty of patience on hand when looking for big payouts here. For more top online slots also featuring Sharks, check out Great Blue and Sharknado.

Deep dive your way to lots of hidden treasure when you play Razor Shark!