Journey to an ancient temple where a powerful queen awaits your arrival in this exciting slot from Crazy Tooth Studio!
casino game review crazy tooth studio microgaming queen of the crystal rays slots

Step into the vast caverns of a forgotten temple and uncover the story of a Queen and her Crystal Rays in this exciting release from up-and-coming software provider Crazy Tooth Studio. The Queen in this game is said to be so powerful that she can create gilded artifacts, sparkling crystals, and bright colourful gems out of thin air with her special ancient mystical powers called Crystal Rays. Read on as we venture deep inside the temple to see if the Queen will bestow upon us a gem-filled treasure on the reels as we play this very interesting online slot.

Queen of the Crystal Rays is a 6 reel slot with 25 paylines that includes Expanding Reels, Any Adjacent Pays, Wild Multipliers, and Extra Wilds. 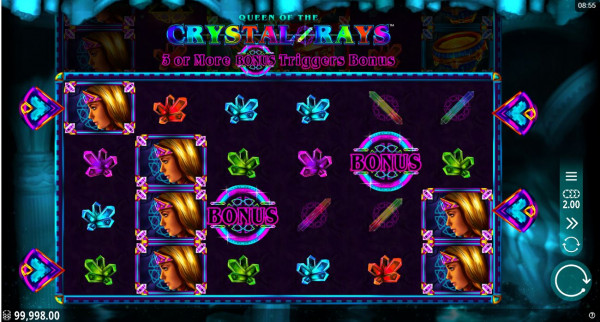 Top Casinos for Queen of the Crystal Rays

More Top Casinos for Queen of the Crystal Rays

To form a win in the game, you will need to land at least 3 or more identical symbols on adjacent reels. Thankfully, this game awards payouts not only from left to right but also from right to left. This is known as the Any Adjacent Pays feature and further increases your chances of landing a big win here.

Queen of the Crystal Rays features a range of colourful symbols that appear on the reels including the Queen herself, a Treasure Chest, a Chalice, a Cauldron, and gemstones. The most profitable symbol in the game is, of course, the Queen as it pays out 2.5X your stake for landing 6 of them on a winning payline.

The game comes with a random bonus event known as the Crystal Ray feature. When this triggers then the Queen will appear on the screen to double the size of the reels which in turn increases the paylines from the original 25 to 50 paylines. One or more Crystal Rays will also activate to add even more Wilds or 2X Multipliers to the reels. The Crystal Rays in the game are displayed as 4 colourful arrow shapes that appear on opposite sides of the reels.

The Scatter symbol in the game is depicted by the word ‘Bonus’ in neon font. Land 3 or more of these symbols on the reels to trigger the special Queen of the Crystal Rays Bonus feature. Once activated, you will be awarded 4 Bonus Rounds with the gameboard now populated with cash prizes that can be won. In each bonus round, crystal rays initiate and cash prizes that are in line with the path of the crystal rays are then paid out. Cash prizes may be multiplied by up to 5 times in this very lucrative bonus feature.

Best Welcome Bonus for Queen of the Crystal Rays

More Bonuses for Queen of the Crystal Rays

Graphically speaking, it's a sterling effort from the Crazy Tooth Studio team as the game takes place deep inside a wonderfully designed ancient temple and you are treated to a neat intro video sequence when loading it up for the first time. It's a rather clever way of learning all about the Queen’s origin story there. Symbols in the game are full of detail and luminous colours and consist of the Queen, a Cauldron, a Chalice, a Treasure Chest, along with a variety of different coloured gemstones. The animations are also worth highlighting as symbols enlarge and sparkle when part of a winning combination. It is particularly pleasing when the Crystal Rays activate as they send bright beams across the reels to further add to the exciting gameplay all the while adding extra Wild symbols.

The music is atmospheric as a soft techno style soundtrack plays in the background. It works really well with the Mystical theme of the game.


Our Verdict on Queen of the Crystal Rays

This game is made by Crazy Tooth Studio in collaboration with Microgaming and is quite a memorable and exciting gaming experience. Featuring stylish visuals and innovative bonus features, you will be spinning those reels with this Queen for quite some time! It’s just great you can double your wins with 2X Multipliers as well as add lots more Wilds and increase the paylines with the excellent Crystal Rays feature. The star attraction here though is the Queen of the Crystal Rays Bonus feature as the Crystal Rays help you land lots of cash prizes which can be multiplied by up to 5 times if you are really lucky. The top prize for this game is a whopping 2,597X your bet which can be won on each spin. In terms of variance, I would say it is Medium so you will notice that wins occur more frequently the more you play. For other online slots that also feature Crystals as a main theme, check out Crystal Rift and Perfect Gems.

Expand the gameboard to win big on the reels when you play Queen of the Crystal Rays!