Planet of the Apes from NetEnt: Slot Review - whose side are you on?

Ape vs Man - your fortune hangs in the balance!
casino game review netent planet of the apes slots

This latest release from leading software giant NetEnt places players smack dab in the middle of an epic battle between humans and apes. As you might imagine, it is based on the hugely successful Planet of the Apes movies. This game draws particular inspiration from the first two movies of the new franchise: Rise of the Planet of the Apes and Dawn of the Planet of the Apes. It charts the rise of Caesar a common chimpanzee who has gained great intelligence and has risen to become the leader of an ape army. Caesar leads his apes into battle and wages war on all humans who want to exterminate his race. I really enjoyed these action-packed movies at the cinema so I could not wait to get my hands on this game to see if NetEnt can really do them justice as an online slot.

Planet of the Apes is a 10 reel slot with 40 paylines and comes with 2 Bonus Features, Free Spins, Stacked Wilds, and a Dual Feature. 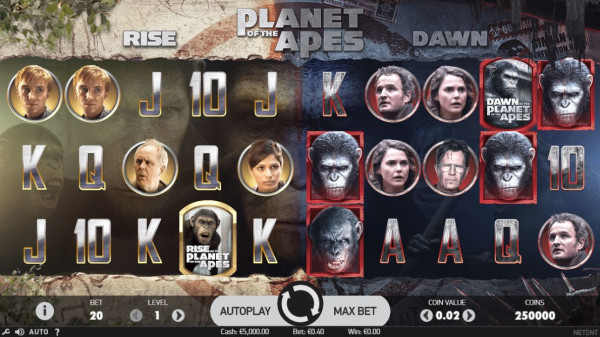 Top Casinos for Planet of the Apes

More Top Casinos for Planet of the Apes

The first feature to highlight is the game features Dual Reels which is essentially two sets of reels each with 5 reels and 20 paylines. These reels combine the first movie Rise of the Planet of the Apes and the second movie Dawn of the Planet of the Apes neatly together and are clearly noticeable from their different coloured backgrounds e.g. the Rise reel is bright and the Dawn reel is dark. These reels also play a major part in the Dual feature. This feature is a random event and when it is activated you’ll be awarded a respin. The game will choose 1 symbol from each set of reels and the reels will then only display the chosen symbols with the rest of the reels displaying blank spaces. If a symbol lands in its corresponding play area when the reels stop then it will stick to the reels and if a symbol lands in the other set of reels then it will transfer over to the correct set of reels into the corresponding position. This feature stops when no new matching symbols land. The Dual feature can be highly lucrative as it’s actually possible to land up to 1,000X your bet!

The Wild symbol in the game is illustrated by a hazard type of logo that is yellow for the Rise reels and red for the Dawn reels. It substitutes for all symbols except the Scatter and Bonus symbols to help contribute to winning combinations on the reels. This symbol also can appear stacked on the reels and if you land a Stacked Wild that covers a whole reel on the Rise play area then it will get transferred over to the exact same spot of the Dawn play area.

The Scatter symbol is represented by an image of the Rise of the Planet of the Apes on the Rise reels and an image of the Dawn of the Planet of the Apes on the Dawn reels. Land 3 or more of these symbols anywhere on the Rise reels and you’ll trigger the Rise Free Spins bonus game. In this feature, you are awarded 10 Free Spins and the number of Wilds that land on the reels are collected on a meter and placed back into view for the final spin to really increase your chances of landing a big payout. It is possible to win up to 600X your wager on each Free Spin while in this feature.

Similarly, if you land 3 Scatters on the Dawn reels then you will activate the Dawn Free Spins feature. In this bonus game, you will be given 15 Free Spins and you need to collect 3 different symbols consisting of Multiplier, Extra Wild, and Extra Free Spins to activate a corresponding meter. When a symbol lands, it fills the corresponding meter by 1 and when it is full then it will activate one of these features. The Multiplier value ranges from 1X to 5X and if you are lucky enough to land the 5X Multiplier then it’s possible to win up to an incredible 3,000X on every Free Spin!

Best Welcome Bonus for Planet of the Apes

More Bonuses for Planet of the Apes

The game features a highly polished presentation as it takes place between the first two movies of the new franchise so you’ll notice that the first 5 reels represent the Rise movie with lots of bright colours used and the last 5 represent the Dawn movie with lots of dark ominous colours used. Symbols are superbly rendered on screen and consist of characters from the movies such as Caesar, Koba, Malcolm, Dreyfus, Caroline, and the standard A – 10 icons. The animations are excellent as symbols enlarge and move about when you land a win and fans of the movie are in for a real treat when they load up the game as there is an excellent intro video highlighting various scenes of the first two movies.

The music is fast-paced, action-packed, and full of dramatic sound effects. It compliments the gameplay perfectly.

The game features 40 paylines, a healthy RTP of 96.33%, and a gigantic maximum payout worth 3,000X your initial wager.


Our Verdict on Planet of the Apes

Stellar software studio NetEnt produced this amazing slot and I am happy to say that it is a very faithful adaptation of the first two Planet of the Apes movies. The game features a highly original set of 10 reels and 40 paylines which makes it extremely fun to play. It also features some jaw-dropping visuals taken straight from the movies and it contains a huge selection of bonus features which will provide players with countless hours of entertainment. The most lucrative bonus feature is the Dawn Free Spins bonus game since it offers the potential to win some huge payouts especially when you land a win with a 5X multiplier. The only downside to this great game is there is no symbol of the loveable orangutan Maurice! I found this slot to be of Medium variance so you’ll notice that payouts occur quite frequently the more you play. For similar-themed slots all about apes and monkeys, check out Cool Bananas and Booming Bananas.

Join Caesar for an epic battle of slots when you play Planet of the Apes!