Seek out sunken treasure with the help of a monkey and a ghostly pirate captain when you play this superb slot!
casino game review netent pirates' plenty red tiger gaming slots

Set sail for the seven seas in search of hidden treasure in this new release from top software developer Red Tiger Gaming! Pirates’ Plenty is not your typical pirate-themed slot as this game has a supernatural presence to it as it’s all about an undead pirate captain who holds the key to finding a trove of lost riches deep down the ocean below. Ensuring his treasure is well guarded, the pirate enlists the help of a naughty little monkey who keeps watch on the ghost ship. Join us as we climb on board the captain’s ship to see if we can discover his long lost treasure chest and win a tidy cash payout for doing so.

Pirates' Plenty is a 5 to 6 reel slot with 20 paylines that includes Respins, Extra Tall Wild Multipliers, Free Spins, and a Treasure Reel. 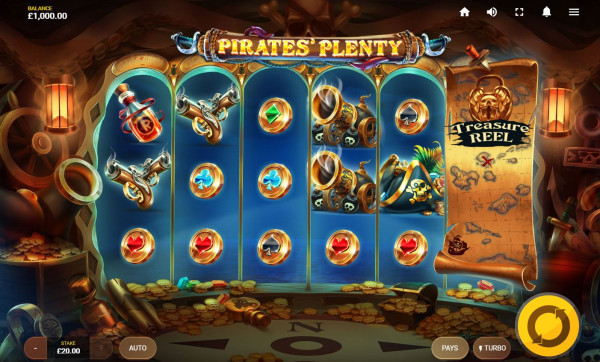 As you play the game, you will notice a special 6th reel that contains a map. This is known as the Treasure Reel and can be unlocked by collecting map symbols the more you play. Once you have filled up the Treasure Reel meter then it will become unlocked and will remain active for all future spins at the same stake. With the Treasure Reel active, you can benefit from 6 symbol wins as well as Extra Tall Wild symbols which can cover an entire reel and not only that but they can appear with lucrative multipliers ranging from 2X all the way up to 5X too!

The Scatter symbol in this game is represented by the words ‘Ocean Spins’ in a circular logo. Land 3 or more of these symbols anywhere on the reels to trigger the Ocean Spins bonus feature. Once activated, you will be awarded 10 Free Spins with the Pirate Captain symbol now appearing on the reels. Whenever this new symbol appears then you will unlock the locks on the treasure chests displayed at the top of the reels. Unlock all 3 treasure chests to receive Extra Free Spins or get 1 of the lower-paying symbols to turn into a Wild. The neat thing about this feature is that you can open multiple treasure chests which means you can add lots of Extra Wilds on the reels as well as claim plenty of Extra Free Spins.

The presentation of the game is graphically superb as it takes place inside of a ship with swinging lanterns illuminating the reels along with a hoard of gold coins just below them. Symbols are wonderfully designed and consist of the Captain, a Monkey, a Skull, a Pirate Hat, a Cannon, Muskets, a Bottle of Rum, as well as Spades/Diamonds/Clubs/Hearts coins. The animations are fantastic as symbols fly up and down the reels and shine brightly when part of a winning combination. A particular highlight is when the Wild Monkey symbol is part of a win as he scurries about on the reels collecting all of the low-value symbols in order to replace them with bigger paying symbols. It really adds to the gameplay.

The music is lively and atmospheric. Needless to say, it complements the fast-paced gameplay really well.


Our Verdict on Pirates' Plenty

This game is made by Red Tiger Gaming and is a fun seafaring adventure we thoroughly enjoyed playing. It features fantastic graphics, exciting gameplay, and a superb range of bonus features too. Keep a close eye on the Wild symbol in this game as it can lead to some nice cash payouts especially when the monkey replaces a load of low-paying symbols with high-paying ones. The Treasure Reel will take you lots of spins to unlock but with Extra Tall Wilds with lucrative 5X Multipliers up for grabs then it is more than worth spinning for. The only drawback here is that every time you change your bet then you will have to start the process of unlocking the Treasure Reel all over again. We should also highlight that the top prize for this game is a spectacular 5,000X your wager! Variance-wise, I found this slot to be High so be sure to have plenty of bankroll on hand as well as patience in order to land a big win here. For slots with a similar Pirate theme, check out Pirate's Charm and Wild Plunder.

Unlock the Treasure Reel to reveal a bountiful treasure when you play Pirates' Plenty!