Enter a time when newspapers were all the rage and at their most popular.
casino game review paper wins roxor gaming slots

Reading the news online has become mainstream nowadays, but nothing really beats reading a good old-fashioned newspaper. Sadly, newspapers are on the decline but this game is a timely reminder of when newspapers were your only source for finding out what was going on in the world. Paper Wins dives straight into the fast-paced and often chaotic world of the news printing industry. So if you know your Daily Mail from your TV Times then you will know what this game is all about.

It is a 5 reel slot game with 15 paylines and comes with bonus spins and multipliers. 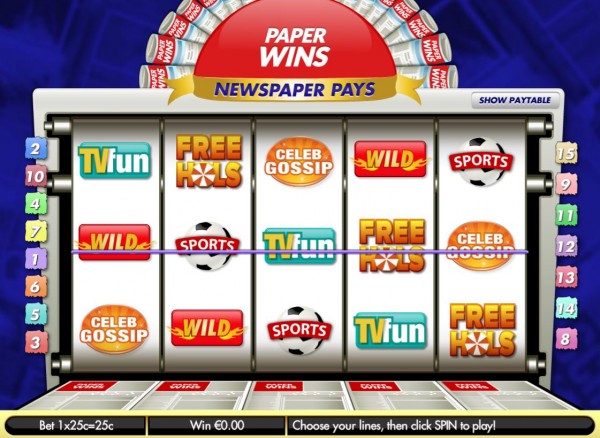 The first feature to mention is the Wild symbol and it is denoted by the word “Wild” with a dark red background. It substitutes for all other symbols in the game except the Scatter and Bonus symbols. It is the highest paying symbol in the game and if you land 5 of these symbols then you will be awarded a whopping 10,000 coins!

The Scatter symbol is depicted by a golden star and it is nice to know that Scatter payouts are multiplied by the total number of coins bet. If you are lucky enough to land 5 Scatter symbols then you will win 50 times your coin size!

The Bonus Spins symbol is illustrated by a newspaper image with the headline “Extra! Extra!”. If you land 3 of these symbols on a paid payline then you will trigger the Bonus Spins feature. In this game, you click on a newspaper to reveal how many free spins you’ve won and a win multiplier. With every Free Spin, you are guaranteed a Free Spin Bonus. If you land 3 more Bonus Spins symbols during this feature then you will be awarded a Bonus Repeat where the number of spins you just won will be added to your current total. There is potential for some huge payouts in this feature so make sure to make every Free Spin count.

To be honest, the graphics are not that special although they tie in well with the theme of the game. For example, all of the reels are displayed on a paper pressing machine. Symbols consist of various iconic newspaper brands and there are old school symbols such as bars and cherries thrown in for good measure. The symbols run smoothly along the reels but there are no real animations to speak of when playing this slot.

When you spin the reels, a piece of 80s style music bounces into life. It can be a little offputting and maybe putting in sounds of a real newspaper pressing machine would have suited this game a bit better.


Our Verdict on Paper Wins

Paper Wins is made by Roxor Gaming and it is a nice tribute to the golden era of newspapers. Although the graphics are a bit dated and not that polished when compared to more modern slots, it does have a certain charm that will draw in plenty of players. The Bonus Spins feature provides lots of entertainment and the game is of medium variance so you should not be waiting too long for a decent payout.

Hit the headlines in Paper Wins!