Ancient Greece has always featured greatly within the world of slots. “Ta,da” – unsurprising, and obvious in light of its name, Olympus Glory by EGT too draws on this theme. 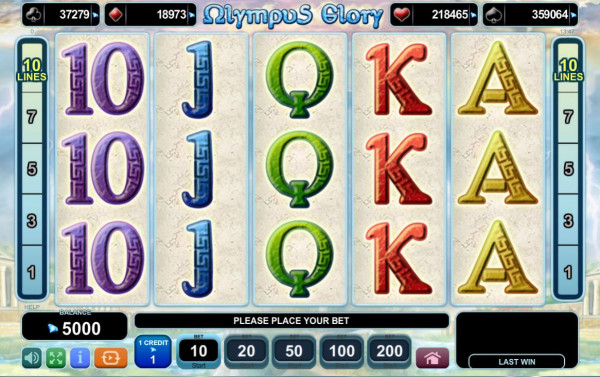 On Mount Olympus, players may meet Wild Zeus. This symbol, as the name suggests, is the wild symbol in Olympus Glory. This symbol creates extra paylines by getting rid of other symbols with his lightening bolts. A little unconventional, this symbol has another purpose. If a player receives three or more anywhere on the reels, 10 free spins will be triggered. A random symbol expands and covers at least one reel. This reel locks and the other reels spin.

While this is a pretty powerful symbol, players can profit most by winning the jackpot. This jackpot, unlike in other progressive jackpot games, is shared among all EGT slot games. Imagine that, a jackpot that is the result of many, many games. While many more players have the chance to win, the jackpot is paid out more frequent and reaches higher amounts much quicker.

The graphics are very impressive. The background shows blue skies and ancient Greek buildings, the greenery creates a sense of Mediterranean heat.
Zeus and Poseidon feature as symbols and the dramatic sound effects add to the all-over positive first impression. Furthermore, these symbols are expertly designed, which makes it easy to focus on this slot game for quite some time.

Due to its great graphics, detailed symbols and a relaxing background, Olympus Glory can be played for prolonged periods. In a way, this is only right, given that Greek mythology has fascinated players, alike history buffs, for many centuries. With the jackpot offering a great incentive to play the game, it will be tempting for players to just keep playing. Therefore, I tend to put back a small percentage of my winnings each time. This ensures that I never fall to far from the gods, and always have that little bit of heavenly luck.

Our Verdict on Olympus Glory

Unlike the truly gigantic software providers, NetEnt et al, EGT does things a little different. While it lacks in some of the core features that these providers tend to employ, it features others - and these make up for much. In fact, Olympus Glory offers a great break from the usual slot games. This game is best played on mobile, try it and you will see how the sleek graphics come out even better with high screen resolution.