Narcos from NetEnt: Slot Review - the chase is on!

Wage a war on the drug lord of Colombia in this action-packed online slot from NetEnt!
casino game review narcos netent slots

Step into the violent world of 1970s Columbia in this new release from software giants NetEnt. As you may have guessed from the name of this game, this slot is based on the smash-hit Netflix show which focuses on one of the most powerful drug lords of all time – Pablo Escobar. It charts his rise to forming the Medellín Cartel as two American DEA agents try to bring him to justice. The show ran for 3 seasons with the first two focusing on Pablo Escobar and the drug war in Colombia. It was well received by audiences worldwide, so much so in fact that the Brazilian actor who played Pablo Escobar even recorded a birthday message for world-famous musician and big fan of the show Noel Gallagher! Read on as we hit the reels hard to see what cash prizes are waiting for us in Colombia?

Narcos is a 243 ways to win slot that includes Walking Wilds, Extra Wilds, Free Spins, and a Locked Up feature. 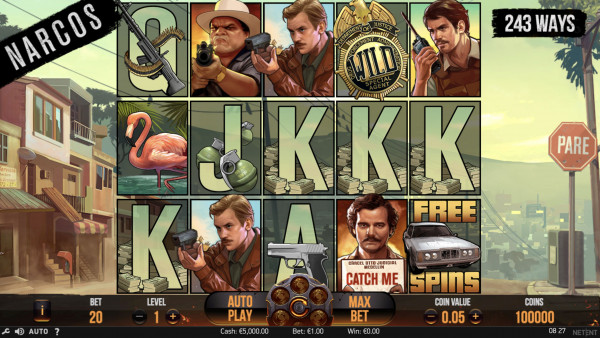 The first feature to mention is that this slot features a massive 243 ways to win with wins being formed by landing adjacent symbols from left to right. With so many ways to form winning combinations, you’ll be leaving Colombia with a nice cash payout in no time at all!

The Wild symbol in Narcos is represented by an image of a DEA badge. Like most Wilds, the main job of this symbol is to replace all other symbols except the Scatter and Locked Up symbols to help create winning combinations on the reels. In addition to this, when this symbol is part of a win then it will lock into place and proceed to shift one place to the left with each spin. This is known as the Walking Wild feature.

Narcos comes with a random bonus event called the Drive-by feature. When this triggers then some of the high-value symbols on the reels will be transformed into Wild symbols to further increase your chances of landing a big cash prize.

The last feature to highlight is the Free Spins feature. This triggers when you land 3 or more Scatters on reels 1, 3, and 5 on the same spin. The Scatter symbol is depicted by an image of a car. In this exciting bonus feature, you will receive 10 Free Spins and on every spin there is a chance that one or more high-value symbols will turn into Wilds. The Walking Wilds feature is also active here and when it is in play then you will receive extra Free Spins until no more Walking Wilds remain on the reels.

This game features superb Grand Theft Auto-style cartoon graphics as it takes you to the bustling streets of Medellín as the DEA agents close in on the drug lord Pablo Escobar. Symbols in the game consist of characters from the show including Connie Murphy, Steve Murphy, Javier Peña, José Rodríguez Gacha, Pablo Escobar, along with Cessna’s, Flamingos, and classic A – J icons. The animations are outstanding as symbols zip down the reels and burst into life spectacularly when part of a win. The Drive-By feature is a particular highlight as when it is triggered then a car will speed by and proceed to spray bullets at the reels to turn normal symbols into Extra Wilds. It really adds to the gameplay.

The music features a slow guitar style soundtrack. It is sort of at odds with the crime theme of the game but it actually complements the gameplay rather well.


Our Verdict on Narcos

Leading software provider NetEnt produced this game and it is one of the best-branded slots the company has released in recent times. Featuring stunning visuals and packed full of amazing bonus features and exciting gameplay, it’s a more than worthy adaptation of a fantastic TV show. Walking Wilds regularly appear on the reels to boost your wins along with the random Drive-By feature to add even more Wilds. The Locked Up bonus round is also quite lucrative as you can benefit nicely from multiplier prizes and upgraded symbols. The star attraction of this slot is the Free Spins bonus feature which unfortunately will take you a good few spins to trigger but it is here where you can enjoy plenty of Free Spins with Walking Wilds as well as win the top prize which is an excellent 1,506X your stake! In terms of variance, I found this slot to be Medium so you will find that wins are awarded quite frequently the more you play. For slots with a similar Crime theme, check out Cops’N’Robbers and The Heat Is On.

Spin the reels as cops and bad guys rip into each other in Narcos!