There are few players who haven't heard about NetEnt's jackpot slot Mega Fortune. This game is renowned for accumulating high progressive jackpots, but even if you don't hit high numbers, this game is rather impressive. 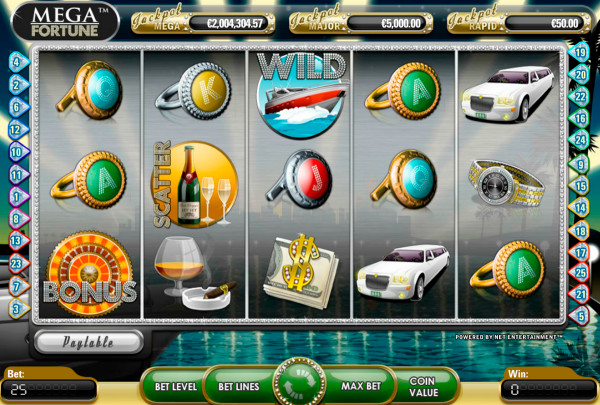 Let’s skip through some of the basics: There are five reels and 25 paylines. Three of more Champagne bottles will get players free spins. The way the system is designed, players then have the choice to pick one of the symbols. This reveals a number of free spins and the type of multiplier. Free spins stop at 10 (which is far from impressive) and offer a solid 5x multiplier.

Of course, you haven’t come to Mega Fortune for free spins alone. Mega Fortune is mentioned in the Guinness Book of Records. In January 2013, 15.4 million was won in the game, making it the biggest ever win in a slot game. Now, how will you get there? Getting in the bonus round is fairly achievable. This is due to the progressive jackpot being tired into three different jackpots.

Once a player gets redirected to the bright orange bonus wheels, he can progress from level to level, with each increasing the amount that is up for grabs. The first jackpot payout is the so-called rapid jackpot. As the name indicates, players merely have to make it to level 2 to be in with a chance of it. This jackpot usually stands at several hundred and goes into the low thousands.

It is, however, level three that you want to reach before you win. If the wheel lands on the big jewel studded arrow, you hit the big progressive jackpot. Even if you are a little ‘unlucky’, there is still a solid chance to hit the middle jackpot or other cash amounts.

Best of all, you have the chance to stop the wheel yourself. If you believe that this is too much ‘responsibility’, then set it to autospin.

The screen that greets players is true to the online game's name. The symbols portray everything that players could possibly imagine buying when hitting that jackpot. Not only are these symbols quite the good hint (yep, all the clichéd symbols of wealth are included, from sports cars, wristwatches to champagne!), they are also designed so, that players can concentrate on the game for prolonged periods and really get that chance to hit one of three jackpots (more on that later!). The luxury theme, on a blue-ish background, really is bright and friendly, unlike some of the dark themes, that NetEnt produces frequently.

It all begins at 0.25, which is the minimum per spin. A Norwegian student, who won millions in 2010, said that he paid 2.00 per spin. This goes to show that you can be just as lucky with a relatively little stake, as with the maximum of 50.00. Being a jackpot game, which progressively accumulates a jackpot with each and every wager in the casino network, it may be advisable to play when the jackpot has reached a jackpot of several million rather than gigantic figures. Fewer players will be playing at that time and with that, your chances of you hitting the jackpot, rather than some other player, increase.

This game really allows players to employ some tactics. However, as with any game of chance, there is never any real logic behind winning. Arbitrary luck is what you need!

Our Verdict on Mega Fortune

I believe the above says it all. Mega Fortune is a truly profitable slot game. However, the hype can also give players false hope. It is still relatively unlikely that a player will end up dripping with jewellery.