Take a trip back in time to when the ancient Mayan civilization was at its peak in this new release from Red Tiger Gaming. The Mayan civilization has astounded researchers for decades as puzzling discoveries are still being made today about this ancient culture. These people were quite fanatical when it comes to astronomy and actually created a highly detailed Mayan calendar that is still accurate to this day! Some scholars even believe that the Mayans may have made contact with aliens as a way of explaining their advanced knowledge of architecture and the stars above. This slot touches on this theory as it's all about UFOs appearing at a Mayan ruin! Let’s see if the Mayans or even the Aliens are willing to part with some cash prizes as we spin the reels in this game? 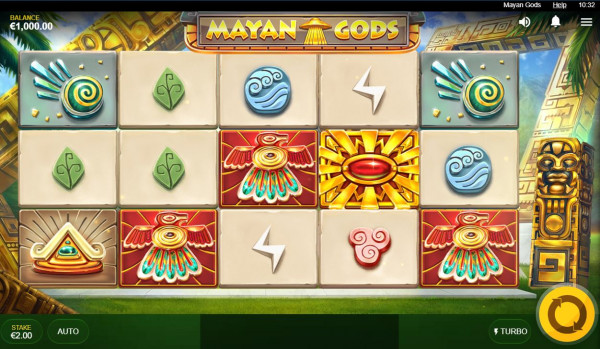 The first feature to highlight is that this slot features a cascading reels mechanic. In a nutshell, when you form a win on the reels then the winning symbols will disappear to be replaced by new symbols from above. This continues until there are no new winning combinations left on the reels and increases a multiplier by one for every successful cascade. This is an extremely popular payout system as seen in fan-favourite slots such as Gonzo's Quest and Crystal Rift.

The Wild symbol in Mayan Gods is illustrated by an image of a panther and like most Wilds, it replaces all symbols to help create winning combinations on the reels. Along with the red runestone symbol, it is one of the highest paying symbols in the game. Land 5 of either symbol on an active payline and you’ll be treated to a fine payout worth 25X your bet.

As you play the game, 4 special Mayan mega symbols can appear at random on any spin and when they do then they will trigger one of the following features:

The graphics in this game are visually outstanding as it takes place in front of ancient Mayan ruins deep inside a jungle with swaying trees and lush green grass surrounding the reels. Symbols are intricately detailed and consist of a range of Mayan totem designs depicting Birds, Flames, Waves, Leaves, and Lightning Bolts. The animations are impressive as symbols plop onto the reels then disappear instantly when part of a winning combination. A particular highlight is when one of the Mayan mega symbols shows up on the reels to trigger a bonus feature as the background changes to a dramatic dark blue sky setting.

The music is atmospheric and filled with lots of background animal noises. It ties in well with the Jungle theme of the slot.


Our Verdict on Mayan Gods

Top software provider Red Tiger Gaming created this slot and we are happy to report it’s a highly enjoyable slot to play. Mayan Gods features superb graphics, a lively soundtrack, along with a decent range of bonus features to keep everyone happy. Unfortunately, there is no Free Spins or Bonus Game here but the Mayan mega symbols pop up quite frequently to ensure the excitement never wanes. We found the Mayan UFO feature to be the most lucrative as notching up a few wins in a row with higher-paying symbols guarantees a big cash payout on the reels. The top prize for this slot is a whopping 6,000X your stake which can be won by increasing the multiplier value to its maximum value by landing lots of consecutive wins. Variance-wise, I found this slot to be High so be warned that it will eat into your bankroll quite quickly. For slots with a similar Mayan theme, check out Contact and Mayan Spirit.

Cascade your way to a UFO-sized fortune on the reels in Mayan Gods!