This game is all about a puppet show known as the Marioni Show. It is hosted by a mysterious croupier that looks like a marionette doll and he is sporting a pencil-thin moustache, a tight purple waistcoat and a tall black hat. He invites players inside his old house to witness a puppet show like no other where two knights battle it out, a princess needs to be saved, and a red dragon awaits the arrival of a hero! So get ready to pull back the purple velvet curtains and take part in a magical story and see if good will truly triumph over evil...or will everyone just get toasted by a big red dragon instead! 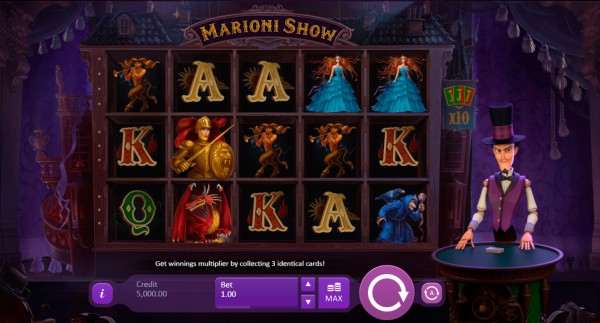 The first interesting thing that I came across while playing this game is the gold and dark knight symbols. These symbols are worth keeping an eye out for as they are the highest paying symbols in the game and if you manage to land 5 across an active payline then you will be rewarded with a lovely 25X multiplier.

You will notice a croupier standing next to the reels and he gets involved in the action too as when you land a win on the reels, he will deal out 3 cards. Your winnings are then multiplied if the croupier deals 3 cards with the same multiplier value. The multipliers range in value from 2X to 4X.

The Wild symbol is represented by a smiling green and red jester. Like most Wild symbols, it substitutes for all other symbols except the Scatter symbol. It only appears on reels 2, 3, and 4. If you manage to land a jester symbol as part of a winning combination then a jester card will be added to the croupier’s hand. If all of the cards are substituted by jester cards then you’ll be awarded a wonderful 10X multiplier!

The Bonus Game is activated when the light and the dark knight appear face to face on the reels. This feature involves the two knights squaring off against each other in order to help you land a super prize. First off, you need to select your knight from either the gold knight or the dark knight. Choosing the gold knight gives you the opportunity to win a 15X multiplier whereas the dark knight gives you 15 Free Spins. Once you have selected a knight, you will be given 4 cards to beat your opponent. If you win then you will move along a progress bar at the top of the screen and once you reach the end, you will be awarded the super prize.

The last feature to discuss is the Free Spins feature. To trigger this game, you will need to land 3 Scatter symbols anywhere on the reels. The Scatter symbol is depicted by a purple castle. In this game, you will be awarded 10 Free Spins and multipliers on the Croupier’s cards increase all the way up to 7X. You will also notice there is a new symbol in this feature and it is called Extra Wild. This symbol is quite similar in appearance to the Wild symbol but it is a purple and red smiling jester instead of a green and red one. The Extra Wild symbol only appears on reel 1 and it features the ability to add a random number of additional Free Spins ranging from 1 to 3. Believe it or not, but it is actually possible to win up to 120 Free Spins in this feature!

The graphics are very impressive as players are treated to a front row seat of the Marioni Show. You will notice purple tassel curtains in the background and a Croupier who is situated at the bottom-right of the reels just waiting to deal out some cards. The backdrop to this slot is a big wooden style castle that is home to all of the symbols. It adds a real dollhouse effect to the game and ties in nicely with the theme. Symbols consist of knights, a princess, an old hag, a red dragon, and a purple castle. The animations are quite good as the croupier deals out cards and symbols spring to life when you form a win along the reels. I also liked how the knights collide into each other when you are playing the Bonus Game. Also, make sure to look out for when you land a really big win as the croupier will cover the screen in gold coins and colourful confetti!

The music is spooky and a little bit unsettling at times but as you can imagine it complements the game really well.


Our Verdict on Marioni Show

Marioni Show is produced by Playson and it is a highly entertaining slot to play. It has a unique theme and the features alone will provide you with endless hours of entertainment. I was able to trigger the Bonus Game and Free Spins quite frequently. The Bonus Game is a great feature and the fact you can win 15 Free Spins to then use in the Free Spins game is fantastic. I found this slot to be of Medium variance so you won’t be waiting too long until you land a magical windfall.