King Colossus from Quickspin: Slot Review - try to gain some colossal wins from the King!

We have tested the online game King Colossus. The slot machine may seem standard, it has 5 reels after all, but is much more powerful considering a superb free spins feature, which comes with added features.
casino game review king colossus quickspin slot machine slots

As we have come to expect from the industry’s leading software providers for online games, King Colossus loads swiftly and never lags. Handy buttons – such as autoplay and max bet – are displayed below the reels, resulting in gameplay being stress-free and immensely enjoyable. As with all Quickspin creations, information regarding payouts is clear and concise. 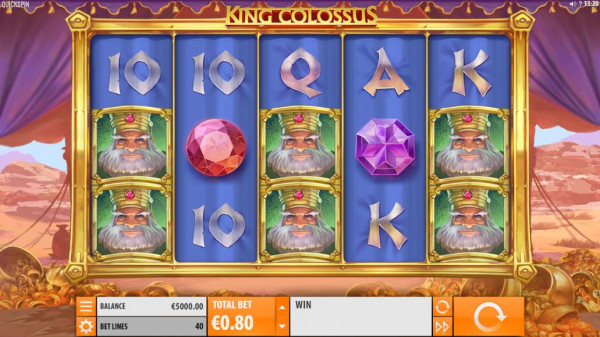 On first glance, this game is bog-standard. King Colossus has 5 reels and 40 paylines. My favourite feature in the game is – unsurprisingly – the free spins feature. I am saying unsurprising, as there is no doubt in my mind that in King Colossus this is the stand-out feature, which can result in massive wins.

To trigger the feature, players need to receive at least three scatter symbols on reels two, three and four simultaneously. They will then receive 5 free spins. Sounds pretty mean, doesn’t it? Well, that’s what you think, until you find out that these free spins can trigger bonus wilds stacked on several reels.

The golden Lion that looks to the right only appears in these free spins rounds, as does the +1 spin symbol, which as the name indicates, translates into an additional free spin during the free spins. That’s not all, though. During free spin rounds, players may receive the king symbol, which can transform the reel into a massive 3x3 symbol grid with wilds on the remaining reels. This almost always results in a superb win.

The only pity in this face-paced game is that it is likely you get free spins but few +1 symbols, however, this is to be expected, as in any game of chance.

Upon opening the slot machine King Colossus, players are greeted with an exotic theme. It’s like entering a faraway place. Players will be dazzled by the beauty of emeralds, rubies and amethysts littered all over the floor. The golden dragon guards the king, while the sound effects delight, not the king, but the many players of this highly popular slot machine.

The theme is quite fun: who wouldn’t like to get a glimpse of the insides of an Arabian castle?

The slot machine can be played from 0.40 a spin. King Colossus can, however, also be played for 120.00 a spin. The latter is rather high. I am not recommending a lower stake because there is little to be won in this slot machine, but because you’d want to play this fun game for many rounds. Ideally, you would set aside a percentage of your wins each time, and increase your stake accordingly. Like that, you can ensure that even if you occur a loss in one of the latter rounds, you have a nice cushion to fall back onto.

Our Verdict on King Colossus

After reviewing this online game, it all makes sense. This slot machine includes a King, he is called Colossus, but your winnings are colossal! This slot machine is relative simple but powerful. It is one of those slot machines that provide hours of casino fun, without being neither demanding nor boring.