Jimi Hendrix from NetEnt: Slot Review - a popular game in honour of this legendary rock icon

Jimi Hendrix by Net Entertainment is a slot machine, which comes with many bonus features, including plenty of free spins, multipliers and wilds. We tested the game and provide you with our verdict on the popular slot from the NetEnt Rocks series.
casino game review jimi hendrix netent slot machine slots

Recently Jimi Hendrix, the highly anticipated slot machine was released to the majority of NetEnt casinos. We reported, and now we tested. As expected from the latest addition to the NetEnt Rocks selection, the player is greeted to the game with a fabulous intro video. Jimi Hendrix, expertly designed, is playing a guitar solo, his silhouette moving in front of a full moon. 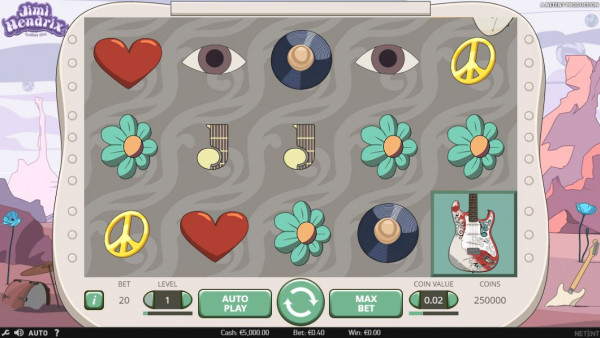 It isn't all but show! The NetEnt slot machine is packed with bonus features, the majority of which give the player free spins. Some of these features are, however, less conventional. For example, the Red Guitar Re-Spin triggers a re-spin of the entire reel, and if the Red Guitar symbol is hit again, it even triggers another reel re-spin.

While this is pretty cool, most players will agree with me that the Pick and Click feature in Jimi Hendrix are the stand-out features. First and foremost, it provides interactivity, which is always fun. Second, it is almost guaranteed to be pretty profitable for players. The game is activated upon a player landing three scatter symbols, represented by a depiction of the musician himself. As these symbols appear on reels 3, 4 and 5, chances of triggering the Pick and Click game are pretty decent.

Players are then asked to click on loudspeakers, which reveal one of four different symbols. Once a player has collected three of the same symbol, he receives the corresponding prize. Here is where it gets difficult: Which of the prizes is the best? First, there is the coin win, which – at random – multiplies a player's initial bet by a minimum of 8 and up to a maximum of 30. Depending on how lucky you get, and how daring you were when choosing your coin value, this bonus feature could be the best of the lot. Then, there is the Crosstown Traffic free spins prize. Funky name, but rather conventional: A player receives six free spins, with wild reels appearing on different reels for each and every spin. The Purple Haze free spins feature is already a good bit more exciting, with up to 12 free spins awarded, coupled with several symbols turning wild during these rounds. The same applies to the Little Wing free spins prize. Players receive up to 12 free spins and between three and five overlay wilds may appear on the reel.

The main game loads. The background is a suitable psychedelic purple, the reels form part of a guitar's body and the symbols depict hippie-esque peace signs, flowers, records and many other items typical of the Hendrix era. So far, the online game is even better than expected. NetEnt put a spin on the theme by moving away from funky colours, typically associated with the hippie era, and surprises players with a much sleeker and 'rockstar cool' version of the theme. This works well with Hendrix tunes playing in the background, which can be reasonably assumed to attract many Hendrix fans to the game.

Told you, Jimi Hendrix is feature-packed! Which of course makes the approach to this slot machine a little more tricky. This game provides both regular and fairly decent-sized wins. Given that the Jimi Hendrix slot machine is fun to play, and let's face it also pretty good to listen to, prolonging your game play through managing your casino funds may be your best course of action.

The bet level starts at 1 and goes up to 10, the coin value begins at a lowly 0.01 and can amount to 1.00. This means that players have a broad choice, when it comes to setting their bet in this game. To ensure that you can play a few rounds, rather than blow it all in one spin, the bet amount is handily displayed next to the level and bet adjusters.

Our Verdict on Jimi Hendrix

Jimi Hendrix was highly anticipated and hasn't let me down. As many reviewers remarked, the graphics are a bit of a surprise. Less rock n'roll and much more flower power. Whether you like this look or not, is down to preference. Our verdict; it's awesome. Net Entertainment has done a great job paying homage to one of the music industry's greats.