Hidden from ELK Studios: Slot Review - warp back in time to ancient Egypt!

Egypt is a land filled with mystery and wonder. It is a country known the world over for its famous and awe-inspiring Pyramids. There have been many Egyptian-based slots released throughout the years so I was quite intrigued when I heard that popular software producer ELK Studios based their latest slot release Hidden in this magical place. The story behind this game centres on an old historian called Professor Taylor and his young assistant Benjamin as they travel to the Great Pyramids of Giza in search of some ‘hidden’ golden treasure.

Hidden is a 5 reel slot game with 178 ways to win and it includes Free Spins, Flashback Respins, Expanding Symbols, and Sticky Wild Reels. 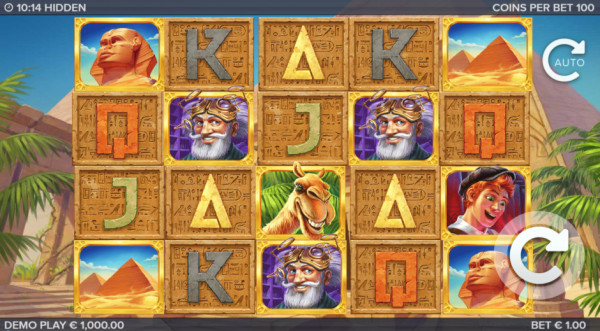 The first thing to highlight is the Professor Taylor symbol as this is the highest paying symbol in the game. If you are lucky enough to land 5 of these symbols on an active ways to win line then you’ll win a fantastic 1,000X payout!

The Wild symbol is represented by the word ‘Wild’ with a gleaming orange and red background. Like most Wild symbols, it substitutes for all other symbols except the Scatter symbol to help form winning combinations on the reels.

Hidden features Flashback Respins and these respins are randomly triggered and can occur on any spin in the main game. When activated, you will be transported back to ancient Egypt and awarded 3 Free Respins and up to 3 of the middle reels will be covered in Sticky Wild symbols. The Sticky Wild symbols remain in place for the duration of the 3 Respins to really help boost your chances of landing a big win.

The standout attraction of the game is the Treasure Rooms Free Spins feature. To trigger this feature, you will need to land 3 or more Scatter symbols anywhere on the reels. The Scatter symbol is depicted by a magnifying glass resting on top of a map. In this cool bonus game, you’ll be awarded 5 Free Spins and each time the Scatter symbol appears on the reels, you will be given an additional Free Spin. One random symbol is chosen and acts as the expanding symbol when the bonus game begins. Every time this symbol appears it will expand clockwise to form a 2x2 grid for every Free Spin. Whenever you land a win in this feature, all non-expanding symbols will explode and make space for a second symbol to drop onto the reels before the next Free Spins starts. This provides a great opportunity to land even more 2x2 symbols and increase your winnings considerably.

As you might expect from stellar software developer ELK Studios, the presentation of this game is flawless. As soon as you load up the game, you are treated to a well-produced introductory video that sets up the story nicely for the game. The graphics are wonderfully detailed and full of life and colour. The backdrop of the slot is the famous Pyramids of Giza complete with blue sky and trees in the distance. Symbols consist of Professor Taylor, Benjamin, a Sphinx, a Camel, and the standard A – 10 icons. The animations are very impressive as symbols fall off the screen quickly and then spread specks of dust everywhere. I was blown away when I triggered the Respin feature and the whole backdrop transforms into a stunning view of ancient Egypt. A really nice touch there!

The music is atmospheric and has a real Arabic vibe to it. It complements the Egyptian theme of the game really well.


Our Verdict on Hidden

ELK Studios created this slot and it is an action-packed journey to Egypt you won’t forget in a hurry! The game is really easy to play, superbly presented, and contains a nice set of features that will provide players with countless hours of entertainment. It took me quite some time to trigger the Free Spins feature but it is entirely worth the wait as the rewards can be huge as symbols expand to really boost your payouts. I found this game to be Highly volatile so it will take a bit of time, patience, and a few dry spins before you begin to make a profitable return.

Land a fortune fit for an Egyptian Pharaoh in Hidden!