Heart of the Frontier from Playtech: Slot Review - giddy up partner!

Head to the Wild Wild West and visit a town where a bunch of women are running the show.
casino game review heart of the frontier playtech slots

Western-themed games are back in fashion as software developers release slots to follow the trend of hit TV shows such as Westworld, Damnation, and most recently Godless in the hopes of connecting with these audiences. This latest release from renowned software studio Playtech veers more towards the smash hit Netflix show Godless as it is set in a dusty old town run by a bunch of gutsy female characters. So have your six-shooter at the ready as we drop by this town to see what fortune is hidden deep within the Heart of the Frontier.

It is a 5 reel slot game with 20 paylines and includes Stacked Symbols, Expanding Wilds, Sticky Wilds, and Free Spins. 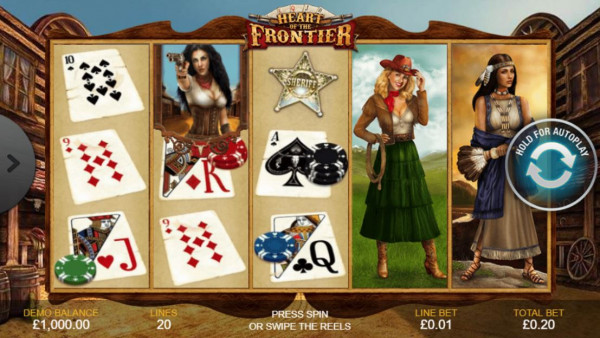 Top Casino for Heart of the Frontier

The first feature to mention is the main Wild symbol, it is denoted by an image of the game logo. Like most Wild symbols, it substitutes for all other symbols except the Bandit/Sheriff Wild symbols. It is the highest paying symbol in the game as if you manage to land 5 of these symbols on an active payline then you will be exiting the Wild Wild West with a fantastic top prize of 500 coins!

As well as this Wild symbol, Heart of the Frontier also features 2 additional Wild symbols which are represented by a Sheriff and a Bandit. When one of these symbols lands on the reels, they will expand to fill an entire reel and also act like a Wild symbol by substituting for all other symbols. When they pop up on the reels, the Sheriff symbol will move to the right and the Bandit symbol will move one place to left for each spin until they drop off the reels.

If both symbols appear on the reels at the same time then the Showdown Free Spins feature will trigger. Here, you will be awarded 5 Free Spins and any Sheriff/Bandit Wilds that activated the feature will lock and remain in place until the feature ends. Any Sheriff/Bandit Wilds that land during this feature will also lock in place for the remaining Free Spins. When the Free Spins end, the Showdown part kicks in where the Sheriff and the Bandit will start shooting at each other. The survivor of the shootout will stay on the reels when you return to the main game.

Best Welcome Bonus for Heart of the Frontier

The presentation of the game is top-notch as it is set on the streets of a dusty old town and you’ll notice a timber saloon on the left side and a hotel to the right. The symbols are wonderfully detailed and consist of a Cowgirl, a Sheriff, a Showgirl, a Native American, a Horseshoe, and a Sheriff Badge. Special mention for the standard A-9 icons as each one is displayed as a proper playing card rather than just a boring single number or letter that is seen in most online slots. The animations are impressive especially when Wilds expand to cover reels or when you land a winning combination and the symbols enlarge and burst into life.

The music is western/country based as you might expect and each time you spin the reels, you will hear the clip and clop of a horse galloping. It ties in really well with the Wild Wild West theme of the game.


Our Verdict on Heart of the Frontier

Leading software producer Playtech created this slot and it’s one very exciting trip to the Wild Wild West. Although the Western theme has been explored countless times before, this new take on it feels fresh and it is fantastic that it features a cast of female characters which really helps to elevate this game from the rest. Heart of the Frontier is very easy to get into and features a very slick presentation full of stunning visuals and a cracking soundtrack. The Expanding Wilds are an excellent addition to this game and offer players the chance to win some huge payouts. The Showdown Free Games feature is quite hard to trigger to be honest but it is worth your patience as Wilds lock into place on each Free Spin and the rewards can be massive. I found this game to be of Medium variance so you’ll find that wins are evenly balanced the more you spin the reels.

Survive a shootout to win really big when you play Heart of the Frontier!