Great Adventure from EGT: Slot Review - it does exactly what it says on the tin...

Classic slot symbols feature in the game. These colourful letters add to this slot machines’ fabulous set-up, and while less profitable than the prominent symbols that draw on the adventure theme, they also boost a player’s potential to win. The sound effects are pretty good. Unlike in many other slot machines, there is no need to press the mute button in this EGT slot machine. 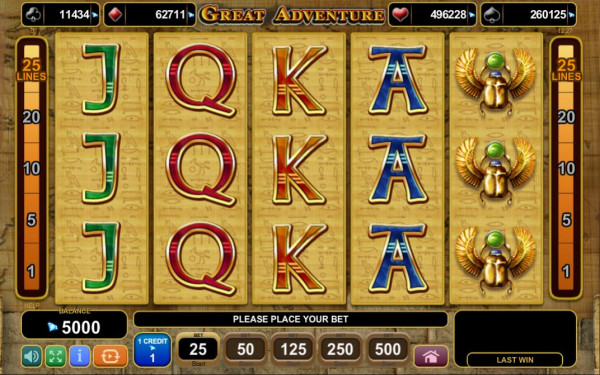 The adventure starts within the pyramid. The more secret symbols you discover, the deeper you are drawn into the midst of this Egyptian adventure. The hieroglyphics in this slot machine pay a maximum of 3,000 coins, Masks of Ra and scarab beetles are a good bit more profitable, and provide players with 6,000 coins. However, the symbols that you’d really want to come up are the sexy patron and explorer, which provide a good 10,000 and 20,000 coins respectively. Secret notebooks come in on up to 25,000 coins and also act as a wild symbol in Great Adventure.

Furthermore, this symbol (when found on reels 3,4 or 5) triggers the Statue Feature, which is a Pick Game, adding interactivity to the slot game. A player is redirected into the world, where he has to pick one of five statues. Once his pick has been made, the number of free spins are revealed, with 3 being the lowest amount and 10 the highest. While this may not sound as generous as in other slot machines, one symbol turns wild and additional spins can be triggered.

A second Pick Game is also available in Great Adventure. Here is where the mission gets challenging. Which one is my favourite? The second Pick Game, referred to as the Jackpot Cards Bonus, can surprise players with instant prizes at any time. When the feature appears, a player has to pick one of 12 playing cards, and he bags the prize the card reveals. The game ends when three cards of the same suit have come up, which means that players can win up to nine prizes. If you are feeling risky (after all, you are on an adventure!), you may want to give the incorporated gamble feature a go. This feature allows you to guess whether a card will be red or black. If you guessed correctly, all wins under 15,000 coins will be doubled!

At first, you may think, this EGT slot is a mixture between Crocodile Dundee and Indiana Jones. Great Adventure certainly is a super name for a slot game, and it's only once you see the Egyptian-themed symbols that you realise where this adventure is taking place. The game features explorers, secret notebooks, treasures and attractive patrons. That’s pretty much how one would sum up the design in Great Adventure by EGT. Set against a sandy-brown background, this slot machine is not just creative in design and features scarab beetles and other cool symbols, but is also designed to ensure the maximal enjoyment of the game. Hungry player eyes will not tire out in Great Adventure and the bright design promises to boost player mood.

By now you have grasped the type of slot Great Adventure is. Players are bombarded with features, which are not only fun to play but also pretty profitable. Whether you are playing on a tablet, desktop or mobile, this game provides so much fun that you will most likely want to play this game for longer than your average slot game. To do this, you have to plan well. Make sure to have an appropriate amount of casino funds and set your coin value so that you can spin that reel more than once. Personally, I tend to set aside a percentage of my wins and adjust the amount of my next bet accordingly. Given that the game is super interactive, I tend to use the auto spin option little. However, it can be tedious to click 'spin, spin and spin' again, if you are enjoying Great Adventure for more than a few minutes.

Our Verdict on Great Adventure

Some players may say that the wins in Great Adventure are bog-standard. Correct. This online game has no progressive jackpot. Instead, it has some fun interactive features. For that reason, I would promote this slot game over others. EGT did a good job in creating a slot machine that is somewhat classic but includes plenty of bonus features to be considered ‘a little more’ than that. Great Adventure is what its name promises: Never a minute of boredom, thanks to the many exciting surprises.