Enter a colourful cartoon jungle in this online slot from premier software developer NetEnt! This game was released a few years back and has been a big hit with players all across the world ever since then so it was high time that we got around to reviewing it. Go Bananas! centres on a bunch of mischievous monkeys and apes who like nothing more than to swing from tree to tree while munching on lots of bananas. The playful characters here include a Gorilla, an Orangutan, a Baboon, a Tarsier, and a Langur. Without further ado, let’s join these wild monkeys to see if they will help us land a jungle sized fortune on the reels in this game?

Go Bananas! is a 20 payline slot that includes 5 different Wild symbols and a Wild Monkeys feature. 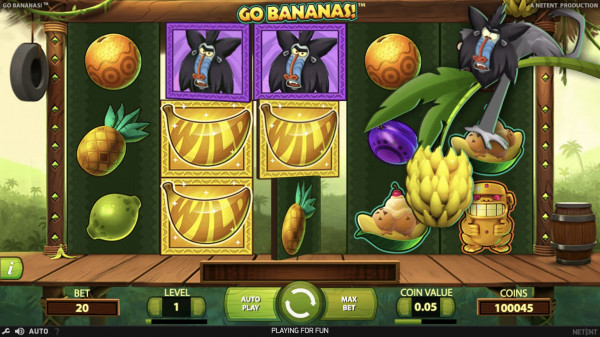 Go Bananas! features a range of colourful symbols that appear on the reels as you play. These include a sparkling Pink Gem, a Monkey Totem, a Money Clip, a set of Bongos, an assortment of Fruit, and of all things a Banana Split! I would be very interested to know how the Monkeys make up that last one! Wins are formed in this slot by landing 3 or more identical symbols from the leftmost reel to the rightmost reel.

The game does not feature just one Wild symbol but in fact 5! These Wilds are comprised of the various monkeys and apes in the game and consist of a Wild Gorilla, a Wild Orangutan, a Wild Baboon, a Wild Tarsier, and a Wild Langur. These symbols substitute for the highest possible winning combination on a bet line and when they appear on the reels then they will activate the Wild Monkeys feature.

The presentation of the game is visually sublime as it takes place in a treehouse deep inside a lush green jungle featuring bright cartoonish graphics. The reels are displayed on a neat wooden design complete with a swinging tyre and a bunch of bananas found at the top of the reels. Symbols are wonderfully rendered onscreen and consist of the various Wild Monkeys, a Pink Gem, a Totem, a Money Clip, a Banana Split, as well as various fruit including Pineapples and Oranges. The animations are superb as symbols speed down the reels and pop and enlarge when part of a winning payline. In particular, I like when the Wild Monkey feature triggers as one of the monkeys pops up and proceeds to turn symbols into Wilds. For example, the Wild Gorilla will appear in front of the reels, beat his chest proudly, and then turn 5 symbols into lucrative Wilds.

The music features a bouncy and upbeat soundtrack that triggers every time you spin the reels. Listen closely and you will also hear lots of animal noises including birds chirruping. It all ties together nicely with the Jungle theme of the game.


Our Verdict on Go Bananas!

Top software provider NetEnt produced this game and it’s a fun and fast-paced gaming experience. It features outstanding cartoon graphics, superb animations, along with a very catchy soundtrack. Admittedly, there is hardly any bonus features here apart from the Wild Monkeys feature which is a shame really as a Free Spins or Bonus Game would definitely elevate this slot to make it that bit more replayable. Having said that, the Wild Monkeys feature is very rewarding especially when the Wild Gorilla pops up and turns 5 symbols into Wilds. The top prize for this game is a massive 700X your stake which can be won on each spin and we should also highlight the RTP which comes in at a very impressive 96.91%. Variance-wise, this slot is Medium so you will win decent cash prizes the more you play. For slots with a similar Cartoon Monkey theme, check out Cool Bananas and Banana Rock.

Swing with the craziest apes around when you spin the reels in Go Bananas!