Glow from NetEnt: Slot Review - the game is based on the beautiful Northern Lights

Formerly exclusive to Betsson casino, I was delighted when NetEnt's Glow was released to further casinos in January 2016. I had heard of this 5-reel, 3-row and 15-payline slot game. 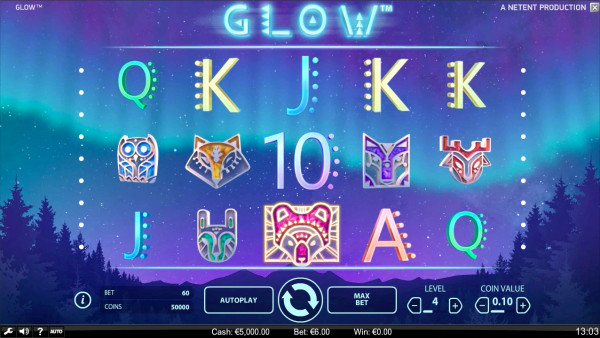 Glow comes with a Multiplier, which boosts the potential maximum payout to 96,70%. To double your win, players first need to hit the bear symbol, incorporated into a winning bet line, to enter the free spins round. If players receive a Wild symbol in a winning combination in the free spins round, the winnings are multiplied by 4. I needn't explain why this is my favourite feature in Glow.

It is, however, simultaneously my least favourite feature, as it's a rare occurrence to get that lucky. Having said that, the free spins alone are a great addition in Glow, and make up for much.

The theme of the game are the Northern Lights. While this is a somewhat unconventional theme for most, it’s less so considering NetEnt’s Swedish roots. The background picture is pretty attractive. A faint glimmer of green mixes with the dark sky. The graphic team did a great job.
Furthermore, the game interface has the usual features, we have come to expect of NetEnt# slot games. ‘Auto play’ alike ‘Max Bet’ buttons are part of the game.

The coin value can be adjusted from 0.01 to 1.00. The bet level from 1 to 10. As such the maximum bet level (10 x 15 win lines) amounts to 150. This is a relatively high amount, and wouldn't appeal to me. I tend to choose a bet around the mid-range. The handy pay table shows how much each and every symbol is worth. A winning combination consists of at least three identical symbols on a consecutive win line. Due to this simplified system, I do tend to increase my bet, if I am feeling lucky.

Our Verdict on Glow

Glow's biggest asset is its sleek design. The winnings can be high in this game; however, they tend to remain stable and relatively moderate. It is fair to say, that Glow caters to both big cats and novices.