Gemtastic from Red Tiger Gaming: Slot Review - a gem of a slot!

Put on a yellow safety helmet and grab a pickaxe as we head to a cave full of very expensive looking gems in this extremely popular Red Tiger Gaming slot! Gemtastic as you might imagine is all about mining for precious gems in a mysterious cave. Mining based slots are a big hit with players all across the world as they invite players to dig and mine their way to a massive cash payout deep down below. The cave in this game is actually so far down that there is a sizzling hot lava flow just beneath the surface! That’s not all either as it also features a plethora of sparkling gems that magically glow in the dark! Read on to find out if mining in this cave will lead to lots of gem-filled cash prizes on the reels? 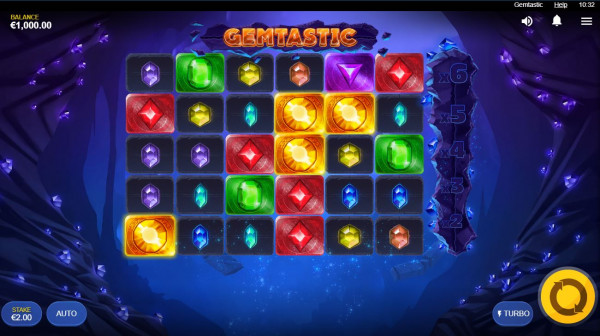 The first feature to discuss is the Wild symbol which is illustrated by a multi-coloured gem with the letter ‘W’ encased inside. This symbol replaces all paying symbols on the reels to help form winning combinations and only appears when the Magic Glow feature is triggered. It is the highest paying symbol in the game as if you manage to land 6 of these symbols on an active payline then you will bag yourself a sweet payout worth 75X your wager!

Gemtastic features a cascading reels type of system known as Chain Reactions. This means that when you form a win on the reels then the winning symbols will disappear to leave space for more symbols to drop in on the same spin. The chain reactions continue until no more winning combinations appear on the reels. A nice feature of this system is that for every winning chain reaction you create then you will increase a multiplier by 1. The multiplier can reach a maximum of 15X which offers massive potential to win huge cash payouts provided that you go on a hot streak of wins here. This is referred to as the Lava Multiplier feature.

On any spin, one of the gem symbols may sparkle when part of a win. When this happens, then they will proceed to disperse and transform into Wilds on the subsequent respin. This is known as the Magic Glow feature.

The final feature to talk about is the Mega Gems bonus feature which can trigger on any spin. All of the Gems appear as 1x1 symbols on the reels but can also appear as 2x2 or even 3x3 versions from time to time to help you land even bigger wins! These are known as Mega Gems symbols and are also active in the Magic Glow feature to give you the opportunity to land a few Mega Wilds too!

In terms of graphics and presentation, this game is just visually stunning to look at as it takes place in a dark and damp lava cave full of glistening gems. The symbols in this game consist of a range of gems displayed in different shapes and colours. It is really exciting when one of these symbols shows up as a 3x3 Mega Symbol on the reels as it immediately stands out from the rest! The animations are crisp as gems disappear in a puff of light blue smoke when part of a winning chain reaction and if are lucky enough to land a big win then the screen is splashed with gold coins raining down everywhere.

The music is a bit moody with a light techno soundtrack used throughout. It actually complements the mining theme of the game quite well.


Our Verdict on Gemtastic

Leading software studio Red Tiger Gaming produced this slot and it’s one cave we certainly enjoyed mining gems in! Gemtastic features superb visuals, an atmospheric soundtrack, along with plenty of fun bonus features to keep the action ticking over nicely. The Chain Reaction mechanic in this slot offers incredible cash payouts especially when you go on a roll to further increase the lucrative Multiplier value. Believe it or not but it’s actually possible to win up to 10,000X your stake on every spin here! The only downside to this slot is that unfortunately there is no Free Spins bonus feature to avail of. When it comes to variance, this slot is quite High so make sure to bring lots of bankroll before entering this cave! For slots with a similar Gems theme, check out Gemix and Gem Rocks.

Mine your way to a gem-filled fortune on the reels in Gemtastic!