Fan Tan from PlayPearls: Game Review - let the buttons do the work for you!

For a fun and highly entertaining gaming experience all the way from China then check out this game!
casino game review fan tan playpearls

Fan Tan is a traditional and very simple to play gambling game that originated from China. This game grew in popularity in many other Asian countries and across the world from the 1800’s onwards. In America, this game was played by work gangs who built the Trans-Continental railroad and since New York and San Francisco had large Asian communities it quickly spread to become a very hugely popular recreational activity for many people to play. Renowned software developer PlayPearls decided to release a digital version of the game so that more and more people could enjoy playing this fascinating game online.

The game is played with a cup filled with buttons and features 5 betting options: Fan, Kwok, Sheh-Sam-Hong, Nim, and Nga Tan. 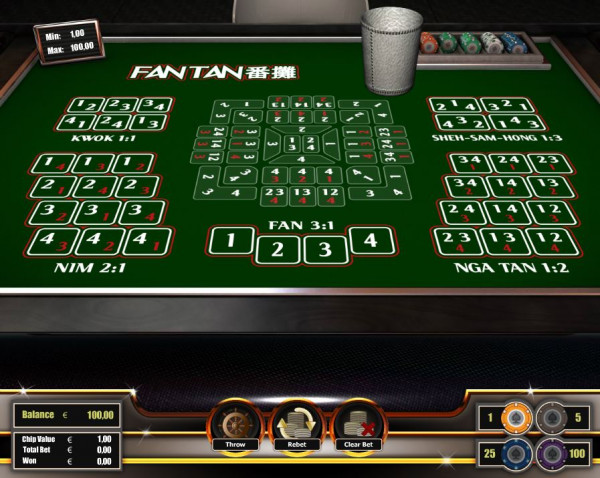 The idea behind this very simple game is to choose a number from one to four that represents how many buttons are left on the table after the dealer subtracts them in groups of four. To play the game, you need to put some chips down on the table. The chips can be found in the lower-right hand corner of the screen and range in value from 1 all the way up to a staggering 100 a piece! Players can choose from a nice range of betting options including Fan (betting on a single number) and Kwok (betting on two numbers where both win). It is pleasing to see that the house edge actually goes down to 1.25% when you place Nga Tan and Sheh-Sam-Hong bets. Once you are happy enough with your bet, click the ‘Throw’ button to begin the game.

The game starts when the dealer picks up the cup that is filled with buttons (or tan as it is known in China) and proceeds to cover the casino table with them. The dealer usually places up to 60 buttons or more on the table. The buttons are then automatically sorted into groups of four and eventually there will only be a few beads remaining on the board which will be either 1, 2, 3, or 4 and that will be the winning number. The game really is as simple as that to play!

If you find some joy using a particular bet then it is possible to use it again and again. To do this all you have to do is press the ‘Rebet’ button after a round has been played. You can remove the current bet at any time by simply pressing the ‘Clear Bet’ button.

The presentation of the game is quite basic but do not let that deter you from playing this exciting game as there is plenty of fun to be had here. The various betting options are nicely displayed on the green-felt casino table and you’ll notice a colourful range of chips placed near the dealer’s chair. The animations are neat especially when the dealer splashes the buttons on the table and then watch as they are quickly rearranged into groups of four.

The only sounds you will hear in this game are announcements from the Live Dealer as he informs you when to place bets and when a round has been won.

The game is played with a cup filled with buttons and has an RTP ranging between 96% and 97%. The maximum payout is 3:1 when you place a ‘Fan’ bet.

Below is a summary taken from the PayOut Table from the game.

Our Verdict on Fan Tan

Fan Tan is created by PlayPearls and I must admit I really enjoyed playing this game. To be honest, I had never even heard of it before so I thought this game might be daunting to play at first especially when you see all the betting options displayed on the table! Thankfully, the game is super easy to play and it is fantastic that the house edge actually lowers when you place Nga Tan and Sheh-Sam-Hong bets. This certainly makes the game that bit more attractive to play.