Emperor of the Sea from Microgaming: Slot Review - a sea of gold awaits you!

Get ready to set sail and go on a fantastic journey to ancient China!
casino game review emperor of the sea microgaming slots

This game has a distinctly Asian feel and is set among some stormy seas in ancient China. It explores the maritime culture of historical China and gives players a glimpse of what life was like for sailors as they travelled choppy waters to trade their goods and wares with neighbouring countries and establish trade routes throughout the world. So get ready to climb aboard a merchant ship and set sail on an exciting voyage to the Dragon Emperor’s kingdom!

The slot has 5 reels with 88 paylines and comes with free spins, rolling reels, growing wilds, and stacked wilds. 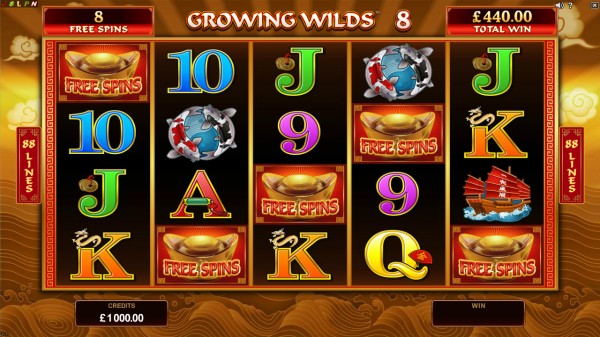 Top Casinos for Emperor of the Sea

More Top Casinos for Emperor of the Sea

The first feature I encountered while playing this slot is that you can choose which payline structure you want to play with. It is possible to choose from 38, 68, or 88 paylines. Not many slots offer this option so it is nice to be able to choose this when you start the game. On a sidenote, the number 88 is considered the luckiest number in China so it is really cool to see that Microgaming incorporated this into the payline amount.

The Wild symbol is denoted by the Emperor of the Sea logo and it substitutes for all other symbols except the Scatter symbol. An interesting feature of this symbol is that it comes stacked across all of the reels in the main game.

The Scatter symbol is illustrated by a beautiful golden Sycee which is a type of ingot currency used in imperial China. If you land 3 or more of these symbols in any position on the reels then you will trigger the Free Spins feature. In this game, you will be awarded 8 Free Spins and it also features rolling reels and growing wilds. Rolling reels are the same as cascading reels as symbols disappear when you land a win and are replaced by symbols that roll into place. This feature is great as it can award you multiple consecutive wins. Growing Wilds involve the Wild stacks growing by 1 additional Wild symbol per spin and it is possible to get up to a maximum of 15 Wild symbols! The more of these lucrative symbols you land in this feature, then the bigger the payout you will be awarded.

Best Welcome Bonus for Emperor of the Sea

More Bonuses for Emperor of the Sea

The graphics are really good as the game is played out over some ocean waves with swirling clouds in the sky and some beams of sunlight breaking through. The symbols are nicely detailed and consist of a fearsome looking dragon, a turtle, a golden sycee, a ship, a green pot, koi fish, and a wooden ship. Symbols blink and flash brightly when you land a win along the reels and the background is beautifully draped with golden sunlight when you trigger the Free Spins game.

The music is Chinese-based as you would expect and it suits the theme of the game superbly. It transports you right into ancient China and creates a nice relaxing atmosphere as you spin the reels.


Our Verdict on Emperor of the Sea

Emperor of the Sea is created by Microgaming and it's a trip to ancient China you won’t forget in a hurry! The Free Spins feature is the main attraction of this slot as it can lead to some very lucrative wins if Wild symbols keep popping up. The slot is of Medium variance so it might take a few spins before you get to land a decent enough payout. If you are a fan of oriental-based slots then you should definitely check this game out and with a maximum payout of 1,875X your stake, there is a nice carrot on a stick for every player to aim for.

Set sail in search of a huge fortune in Emperor of the Sea!