Dragon Shrine is a five-reel slot machine by Quickspin. We tested the game and are impressed with its general game design that allows players to win high sums within a single spin.
casino game review dragon shrine quickspin slot machine slots

Quickspin has just released its latest slot game called Dragon Shrine. Upon starting the game, a very colourful interface greets me. There are 5 reels in Dragon Shrine that are organised in such a fashion that the two outer reels only have 3 reels and the inner reels 4 rows. The symbols are different coloured jewels, adding to the overall simplistic design.

Of course, Quickspin hasn't forgotten about the all important autospin button. All options are displayed neatly below the main game. If that sounds bog-standard, wait until the slot machine turns all dragon red. 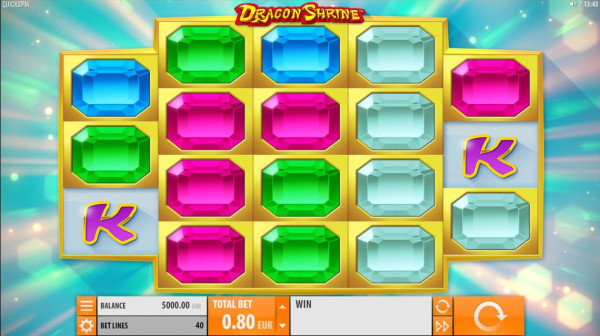 The Dragon Stack Respin feature is triggered at random. You'll recognise your luck when you see plenty of red dragon symbols. A full stack of dragon symbols on the reel gets players 3 respins. During those respins the dragons on the first reel are locked and any new dragon is also locked. This means that at the end of the three respins, a player could be going home with a gigantic win.

Alongside, the Dragon Stack Respin, Quickspin has included some more cool features, such as bonus symbols and the ability to win both ways.

Dragon Shrine is a good game to play if you are hoping to win high amounts. The Dragon Stack Respin is powerful and can lead to your winnings sky-rocketing. This, however, is subject to your bet. If there was any game, I would recommend playing with higher than average stakes, it's Dragon Shrine. The slot machine lets you win 871 times your stake.

So, so. The graphics are nice, yet a little boring. With a name like Dragon Shrine, I would have expected more Asia-inspired symbols and a somewhat funkier background. However, in terms of general game design, Dragon Shrine is pretty impressive and fun to play, simply because players are quite likely to win – and what's not to like about that?