As leading games provider IGT just recently released Da Vinci Diamonds Masterworks, we thought it was high time that we got around to reviewing their much-loved classic online slot Da Vinci Diamonds. This game was a huge hit as a physical slot machine and was released as an online slot way back in 2011. Astonishingly, it still remains as popular as ever as it invites players to journey back to the Renaissance period to a time when creativity and inspiration were at their peak. Let’s see if this game is still worth playing right now and if living the life of a Medici is all that it’s cracked up to be!

Da Vinci Diamonds is a 5 reel slot with 20 paylines that includes Free Spins and Tumbling Reels. 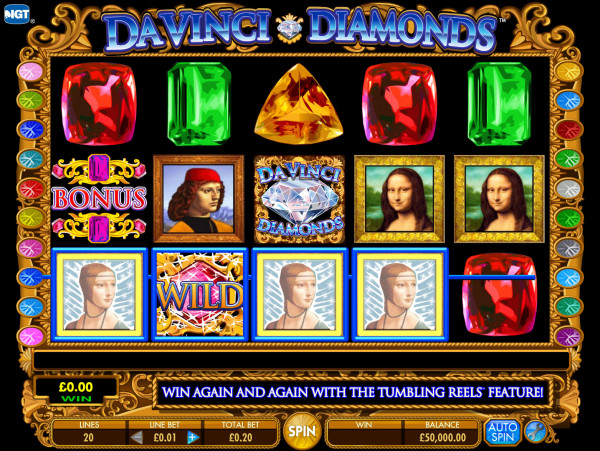 The first feature to discuss is that this game was one of the first online slots ever to feature the highly innovative Tumbling Reels system. This basically means that symbols fall from the top rather than spinning on the reels like traditional online slots and when a winning combination is formed, the winning symbols will disappear to be replaced by new ones. In theory, this can lead to endless wins provided that you keep on landing winning combos. This type of reel structure proved so popular that other software studios implemented similar systems which can be seen in popular slots such as Gonzo's Quest and Aloha! Cluster Pays.

The Wild symbol in this game is represented by an ornate gold design featuring a pink gem with the word ‘Wild’ inside. Similar to most Wild symbols, its main job is to substitute for all other symbols except the Bonus symbol to help create wins on the reels.

Incredibly, it is possible to land up to a total of 300 Free Spins! New symbols such as Yellow and Purple Gems as well as famous portraits including Madonna, Virgin of the Rocks, and Portrait of an Unknown Woman will now also appear on the reels during this feature. Another great addition to this bonus game is that the Tumbling Reels feature is active which means you can keep on winning again and again while in Free Spins.

To be fair, the graphics are a tad dated but that's to be expected when you consider this slot was released in 2011. The game takes place on a black background surrounded by beautifully designed reels which feature a wonderful gold intricate design. Symbols are nicely varied and consist of a range of some of Leonardo Da Vinci’s most famous paintings including Mona Lisa, Portrait of a Young Man, Cecilia Gallerani, and Virgin of the Rocks as well as an assortment of brightly coloured gems. The animations are crisp as symbols neatly fall into place on the reels and sparkle with a bright glow when part of a winning payline.

The music features a classical score which increases in tempo the more you form consecutive wins. It fits in really well with the art theme of the game.


Our Verdict on Da Vinci Diamonds

It’s really easy to see why this IGT slot still remains a classic today as it is a joy to play. The Renaissance theme is certainly unique and that’s probably why it still appeals to so many players who keep on playing it right now. The graphics are rather basic when you compare it to more modern slots but this game has enough bonus features and thrilling gameplay to certainly make up for it. The Tumbling Reels feature is excellent and I was able to rack up quite a few wins on a roll thanks to this wonderful payout system. It took some time to trigger the Free Spins bonus feature but your patience is rewarded handsomely by the fact that you can land up to 300 Free Spins with Tumbling Reels still in play to really boost your chances of landing a big cash windfall. In terms of variance, I found this slot to be Medium so it won’t take you long to win a nice cash payout on the reels. For other great games also made by IGT, check out Electric Tiger and Smash the Pig!.

Seek out a priceless treasure on the reels when you play Da Vinci Diamonds!