Caribbean Blackjack from PlayPearls: Game Review - an ace in the hole!

Like to play a bit of Blackjack? Then check out this amazing Blackjack variant!
blackjack caribbean blackjack casino game review playpearls

When you think of classic casino table games, Blackjack always springs to mind! The game has been around since the 17th century and originated in Spain. It is also known as twenty-one in some parts of the world. Blackjack is so popular that many variants of it exist today so Blackjack enthusiasts really are spoiled for choice when it comes to choosing a Blackjack game that suits their playing style. Caribbean Blackjack is one such variant produced by software giant PlayPearls. It is a really popular Blackjack variant as it lets players split any two initial cards as well as the option to hit and redouble after doubling.

The game is played with a deck of 52 cards and lets players Hit, Stand, Double, Split, or Surrender when the cards are on the table. 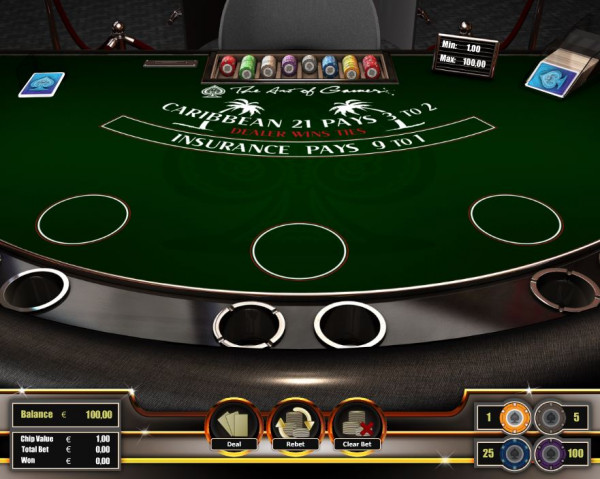 The main aim of this game is to beat the dealer with a better hand. To win a round, you need to get a score of 21 points or a score higher than the dealer without going over 21. If you go over 21 then this is what is known as a ‘Bust’ and you will lose a round. Try to avoid ‘Busting’ as much as possible when playing this game!

To play the game, first, you will need to select some chips to place on the table. The chips are situated in the lower-right corner of the screen and range in value from 1 all the way up to a massive 100 a piece! Once you are happy enough with the chips you have placed on the table, press the ‘Deal’ button to begin the game.

The game starts with the player receiving 2 cards that are face-up and the dealer is given 1 card that is also face-up. The player is then presented with the option of either Hitting, Standing, Doubling, Splitting, or Surrendering. Aces in this game count only as 1 and the dealer doesn’t take a hole card. If you have one Ace and two 10s then you have ‘Caribbean Blackjack’ which ranks higher than any other Blackjack or hand with 21, even after splitting.

A neat feature of this version of Blackjack is that you can split the original two card hand you have been given no matter what the cards are. This is a really good feature as in other Blackjack variants, you can only split cards whey they are identical. Just note that if you do split the cards, you must place an additional wager equal to your original bet and the dealer will then proceed to separate the two cards and deal a single card to each, forming two new two-card hands.

Doubling down in Caribbean Blackjack is also quite different to other Blackjack variants as you can double down when you hold two or more cards and are not restricted to just two-card hands only. When you double down, you'll need to place a wager that is equal to your original bet and players also have the option of doubling down for a second time as well. You can also choose to Surrender at any time which results in the dealer returning half of the total bets placed when a player forfeits a round. These options are fantastic and give players great flexibility to decide what to do with each card dealt by the dealer.

It is also possible to reuse the same bet over and over. To do this all you need to do is click on the ‘Rebet’ button after a round has finished. If you want to do away with the current bet then click on the ‘Clear Bet’ button to get rid of it.

The graphics are pretty basic to be honest but this game is not too concerned about having a flashy presentation as it focuses purely on the action taking place between you and the dealer. The game is played on a silky green casino table that features a cool Spade symbol in its design and you’ll notice a nice range of colourful chips that are placed right in front of the dealer’s chair.

The only sounds you will hear in this game come from the Live Dealer as he announces when to place bets and when a round has been won.

Below is a summary taken from the PayOut Table from the game.

Our Verdict on Caribbean Blackjack

PlayPearls created this cracking Blackjack game and it is a highly enjoyable game to play. The presentation is a bit basic but do not let that deter you from checking this game out as thrill-seeking players are going to love taking on the dealer again and again. It is absolutely fantastic that you can split any two cards as well as redouble during rounds. This really makes this Blackjack variant stand out from the rest. I found this game to be quite volatile so it should appeal to players who like to gamble that bit more rather than just placing small bets.

Split and Double to win a fortune in Caribbean Blackjack!