Blade from Playtech: Slot Review - turn those vampires into dust!

Join Blade a master vampire hunter as he battles to take down a host of vampires who are thirsting for his blood!
blade casino game review jackpot slots playtech slots

This game is based on the legendary vampire hunter known as Blade. I’ve been a big fan of this superhero ever since I saw the movies of this character starring Wesley Snipes. Blade is half-human and half-vampire and is known as the Daywalker because sunlight does not affect him, unlike vampires who get burned by it. He uses a mixture of martial arts and weapons to take down vampires and more often than not, he does it in a very violent way! He is one of the coolest looking superheroes in the Marvel universe and he is definitely due a new movie at this stage!

It’s a 5 reel slot game with 20 paylines and it includes free games, a split feature, and a progressive jackpot. 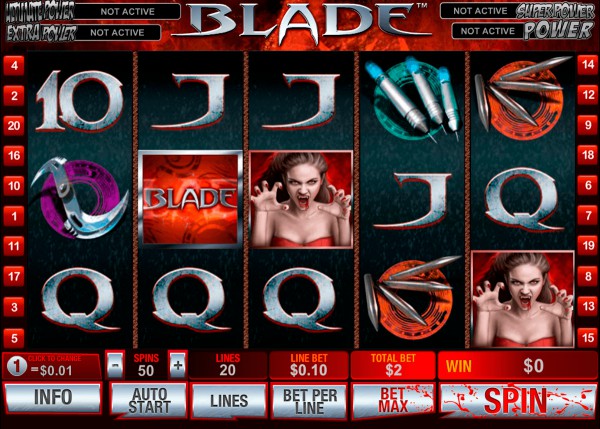 The first feature to mention is the Wild symbol, it is denoted by Blade himself. It substitutes for all other symbols except the Scatter and Blade Split symbols and it is the highest paying symbol in the game. If you manage to land 6 of these symbols across the reels then you will be awarded a staggering 25,000X your bet!

A Blade logo with a bloody red background is the Scatter symbol and if you land 3 or more of these symbols anywhere on the reels then you will activate the Free Games feature. You will be awarded 15 free spins along with a dynamic multiplier. This multiplier is random and can range from 2X to 5X. After each winning spin, the multiplier will increase but after every non-winning spin, the multiplier will decrease but it won’t go any lower than 2X. The Scatter symbol also acts as an additional Wild in this feature. Additionally, if you land 5 of these symbols anywhere on the reels in the main game then you will be treated to a 666X your total bet. A nice nod to the number of the Beast there!

The next feature to mention is the Blade Split feature. This is triggered when the Blade Split symbol appears anywhere on reel 5 and the last winning symbol on all paylines will split into two and combinations of 6 of a kind is possible with this feature. This can lead to some very nice payouts.

The last feature to highlight is the Marvel Multi-Level Mystery Progressive Jackpot. It consists of 4 progressive jackpots: power, extra power, super power, and ultimate power. All of these jackpots are won randomly and any spin of any amount can win entry to a jackpot game including non-winning spins. The higher the bet you place, the bigger the chances of entering this game.

The game is graphically superb and Blade fans will not be disappointed with this slot as he has been faithfully recreated in all his vampire hunting glory. Symbols are wonderfully detailed and consist of Blade, a scary looking vampire, Blade’s pistol of choice, as well as bullets and darts that Blade uses to great effect to take down those blood sucking creatures. The animations really pop when you form a winning combination and I especially liked how Blade splits symbols in two with his sword.

The music is quite moody and full of rock sounds when you land some wins on the reels. It suits the game quite well.


Our Verdict on Blade

Blade is made by Playtech and it’s a fine representation of this much-loved vampire hunting warrior. The features are great and I really liked the Blade Split feature. It is very original and there is scope for some big payouts if you match the right symbols with it. It’s also nice that you can trigger Free Games infinitely in the Free Games feature. It is a medium variance slot so don’t expect to wait too long for a decent payout.

Turn those vampires to ash with Blade!