Baywatch from Playtech: Slot Review - head to the beach with Mitch, CJ, Matt and the gang!

Get ready to patrol the beautiful beaches of Los Angeles with the Baywatch team.
baywatch casino game review playtech slots

This game is based on the classic TV show from the 90s that helped to launch the careers of Pamela Anderson, David Hasselhoff, and Yasmine Bleeth. The show was an American action drama series that took place mainly on the beaches of Los Angeles. Amazingly the show was cancelled after its first season but survived those rocky waters and went on to become one of the most-watched TV shows in the world. The show was also known for its cheesy title music but more for its close-up shots of slow motion running by quite a few of the female actresses who appeared in the show. I am sure lots of men will remember the name, CJ Parker!

It’s a 5 reel slot game with 20 paylines and features Free Games, Respins and a Rescue feature. 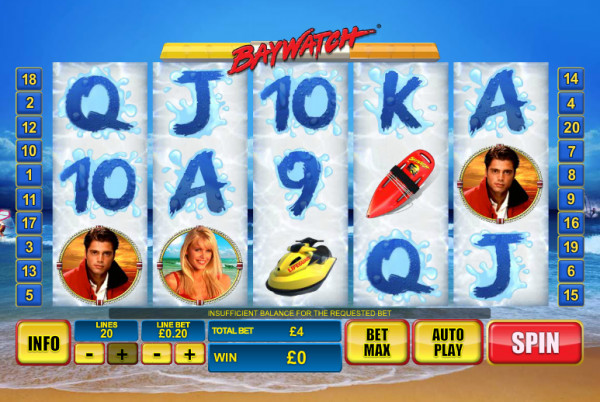 The first feature to mention is the Wild symbol, it is depicted by the most famous lifeguard in Baywatch history that is the stunning CJ Parker. This symbol substitutes for all other symbols except the Scatter and Rescue Feature symbols. It is the highest paying symbol in the game. If you manage to land 5 CJ Parkers across the reels then you will be awarded 3,000X your line bet! This symbol also comes stacked on reels 2, 3, and 4 so this should greatly help your chances of some nice payouts.

The Baywatch Lifeguard Tower is the Scatter symbol in this game and if you land 3 or more of these symbols across the reels then you will activate the Free Games feature. Here, you will be awarded 12 Free Games and reel 3 will be stacked with lifeguard symbols. This opens up 3 lifeguard features and each one of them will give you an extra 6 free games as well as other prizes. The lifeguards Caroline Holden, Matt Brody, and Neely Capshaw will cover the middle reel and it will trigger the appropriate lifeguard feature. The Caroline Holden feature will give you 6 free games as well as a 3X multiplier, and Wild symbols will appear stacked in the middle 3 reels. The Matt Brody feature will give you 6 free games with Matt acting as the Wild symbol when he appears on reel 1, he will remain frozen for the rest of the feature. The Neely Capshaw feature will give you 1 times your stake, 6 free games and a 2X multiplier. Each time that Neely appears, the multiplier will increase and this can go as far as 8X! One last thing about the Free Games feature is that if 3 Scatter symbols appear on the reels then you will be given 12 extra free games and it is also possible to get unlimited free games.

The last feature to mention is the Rescue Feature Bonus. The Rescue Feature symbol is depicted by a flashing yellow light and if you land this symbol anywhere on reel 5 then you will trigger it. This feature offers two choices: CJ Parker Respin and Lifeguard Mini-Bonus. The CJ Parker Respin option will give you 1 free spin with up to 4 additional Wild symbols added to the reels. In the Lifeguard Mini-Bonus game, you have to uncover some lifeguard symbols hidden deep beneath some sand and if you match 3 characters then you will be awarded a prized based on that character. Prizes range from 2X to 10X in this feature.

The game looks fantastic and it’s a great homage to the TV show. The backdrop is a beautiful beach setting with inviting waves and golden sand. The symbols feature Pamela Anderson as CJ Parker, a lifeboat, a famous red life-belt, as well as some of the other characters of the show like Caroline, Neely and Matt. They run smoothly along the reels and pop brightly when you land a winning combination. The only downside of the game’s presentation is there is no “Hoff” in sight at all!

The music really captures the essence of the show superbly and it really does feel like you are on a beach with the gang as you spin those reels.


Our Verdict on Baywatch

Baywatch is made by Playtech and it’s a fine tribute to a classic TV show. The presentation of the game is superb and if you were a fan of the show then you are going to love this slot. I particularly enjoyed the Free Games feature and I found that landing on the Neely Capshaw feature was always the most rewarding for payouts. It’s also nice that you can retrigger free games in the Free Games feature. Baywatch is a highly volatile game so expect to put some time in before getting a decent payout.

Take to the beach with the gang in Baywatch!