Sports have always played a major role within the gambling industry. The competitive nature of sports fascinates gamers. The collection of points or goals in team sports lends itself nicely to sport-themed slot games. For that reason, it is rather unsurprising that Microgaming has developed video slot game Basketball Star.
Some basics first: the game has 243 ways to win, which is at the higher end, in contrast to other slot games. 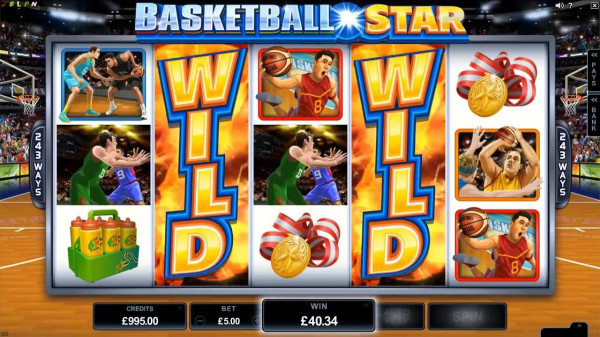 One of the best features in Microgaming’s Basketball Star is the fact that players are the higher paying symbols. This clear-cut division between equipment and players makes playing this video slot much more fun. The joy (or horror) when that reel stops in a certain position creates a nonreplicable thrill.

Not only do these games provide players with great payouts, it also comes with some cool images of basketball players dribbling, slam dunking and other moves. The image quality and design are even more impressive in this case than the court action itself.

Often fans of this slot quote the game’s variety as its number one appeal. Among other features, the Rolling Reels feature can surprise players. The winning symbols are re-spun, after each winning spin. This feature also works with the free spins feature (which offers a player more than 15 spins) and a multiplier is applied.

If there is anything to criticise, it’s that some people may find the many features too erratic. However, given that most slot players love excitement, this will only affect a small minority.

The design has great appeal and its graphics are very impressive. Basketball Star, though part of a different genre of game, is reminiscent of EA Sports’ NCAA Basketball. The background depicts a basketball court, the symbols on the reel portray either basketball equipment or basketball players. The latter ‘literally’ score highly!

This online game offers spins starting at 0.50. With 40 scatter symbols available in this game, even low stakes can result in great payouts. With some good multipliers available in Basketball Star, throwing in a few more bob can pay off quickly. This is especially true given that there are no gigantic wings in this slot game, yet, relatively frequent and stable ones.

Our Verdict on Basketball Star

Once again Microgaming has created an impressive video slot. This game, however, is quite a bit like its other sport-related slot games. If you like basketball, this game should, however, be right up your street. Especially, because it features some fabulous basketball footage, which is wonderfully and sleekly designed.