Aliens from NetEnt: Slot Review - a great game, in honour of the great movie

As with most NetEnt slots, a variety of options are available. Should the tune go on your nerves (which is unlikely, given that it adds to the sci-fi atmosphere), you can switch it off. If autoplay appeals to you, turn it on. To make your game play much easier, and avoid constant clicking, use the max bet button –it’s your 'best bet'. It sets your stake as high as possible, in a single click. But before you do that, read on to see what the odds and features in this slot game are like. 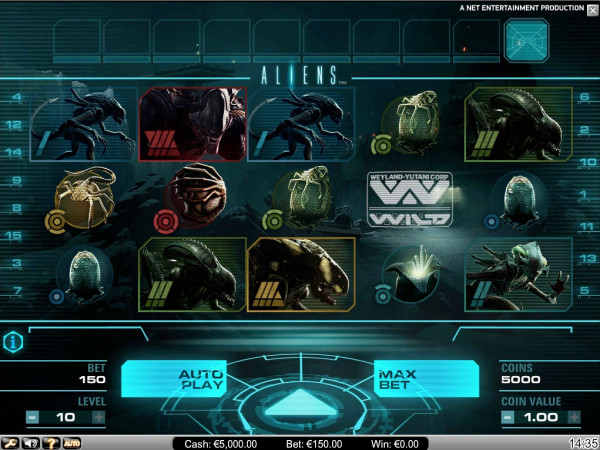 NetEnt is renowned for its feature-heavy slot games. Aliens falls into that category and for this reason (and other reasons, as you will soon understand), deciding on a favourite slot feature doesn't come easy. With that in mind, why not name a few bonus features.

Let's start with the basics. Yes, you heard right, in NetEnt's Aliens there are different levels. In level 1, ‘The Search’, the standout feature is the collection of multipliers, which can result in a player's winnings, at the least, being doubled, or at the most, multiplied by 14. Once 9 multipliers are collected, players are redirected to level 2, ‘The Encounter’. The aim of this level is it to kill as many aliens as possible. If a player manages, he is redirected to Level 3, ‘The Hive’. Why would you want to reach that level? Well, in ‘The Hive’ – as the name indicates – the stunningly designed Queen Alien rests. All complete with her eggs, she rests in her hive. While the player attempts to cause as much damage as possible to the Queen, aliens will be on the attack. The Hive Health Meter displays the progress a player is making. With every step (of four) a player progresses, he gets a coin win awarded. If a player manages to destroy the Queen, a bonus coin win of 240 times a player's bet is awarded.

As noted, it's impossible to pick a favourite feature, as all features in Aliens are in some way linked to one another. There you have it. Aliens is one big love affair.

You are right, the theme of this slot game is based on the sci-fi horror movie from the 1980ies. The tune that greets players fits as well to the theme, as does the graphic design. The background is a digital blue/green and the letters and numbers are displayed in the somewhat square form, typical of computers, and, of course, the genre of sci-fi.

I enjoy this slot game a lot. Therefore, I try to prolong my gameplay for as long as possible. To do so, I tend to never bet the maximum, which is 150.00 a spin. On the other hand, I do want to win some serious money. For that reason, I tend to apply a tactic when playing Aliens whereby I withhold a quarter of my winnings and keep going until I reach the much more exciting levels. Mind you, level one is far from boring, but the serious cash awaits in level 3 of the game.

Our Verdict on Aliens

Aliens by NetEnt is among the quirkiest slot games on the market. First, there are the outstanding graphics, which are razor-sharp and detailed. Next, the game offers something unique with its different levels. The bonus game, which sees players attempting to destroy the Hive Queen, adds immense thrill and fun to this fabulous video slot game.